We are back! The Series 9 Moshi Monsters Moshlings are released on the world on the 14th February; and we are going to be revelaing them all to you again on the blog as we did with Moshi Monsters Series 8.

First up today is the delightful Willow, the Dainty Dear. 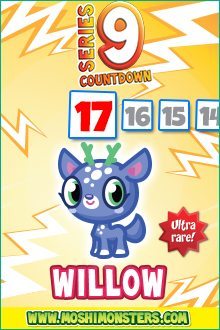 As you can tell, Willow is rather lovable and cute; a bit like Bambi in the world of Moshlings. She has already proved a hit with Chatterbox as she has announced her to be “her favourite” already :-)

They like to be playful in the snow, and use their rather amazing antlers to toss it about as much as possible, probably at un-suspecting moshlings. However, they have know tough times too, as they used to carry the Rox on sledges when they were used in the Twinkly-Dink Mines.

It will come as no shock to you all that they like collecting snowflakes, perhaps mainly of their perfectly formed and rather cute little noses…and they are also partial to a little bit of figure skating as well.Dancing on Ice anyone? Bolero?

Surprisingly, they aren’t a fan of red noses and white beards. Perhaps they are a little worried that they will be roped into pulling sledges again….

In the wintry wonderland around the foothills of Sillimanjaro, or in the windows of Horrods at Twistmastime

What do we have in store for you tomorrow in the countdown? Check back on our blog and find out!