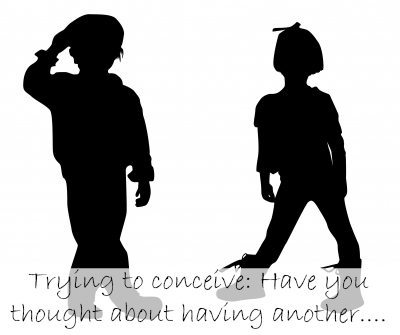 Last Sunday was a tough day.  As one of the other mums at our toddler group announced the news she was expecting baby 2, I got confirmation that I definitely wasn’t.  I smiled and congratulated and then gently moved away from the group as THAT question started to be asked:

When you are trying for a second baby…what do you say?

What should my response be? Yes, I would like another child, I’d love one! And every month when my period arrives my heart sinks and I want to lock myself in the bathroom and weep.  Of course, I don’t do this because I have a gorgeous 2 year old who needs me and when I look at him I feel guilty for so many reasons.  Guilty for getting upset about not being pregnant when I am so lucky to have him. Guilty because I’m not giving him a brother or a sister, and he would be a brilliant big brother.  Guilty that my mind is elsewhere for a few hours.

I’d love to be able to give an honest response. Yes, I want another child and we’ve been trying for over a year but for some reason it just isn’t happening.  Unfortunately, people never quite know what to say if you’re honest and the pleaser in me doesn’t like to make people feel uncomfortable! So when asked I smile and say:

…this generally keeps the asker happy.

On the couple of occasions when their response has been

“Well, you don’t want to leave it too long!”

….I’ve wanted to kick them in the leg, but seeing as that’s not really the done thing they’ve had a bit of a icy glare instead!

As we already have one (very wonderful) son, people assume that getting pregnant with a second is as simple as making the decision that the time is right and a couple of months later a baby is on board. How I wish this was the case.  We have tried the not really trying, let’s see how it goes approach.  When this didn’t work, we moved to OV sticks, and then progressed to using a fertility monitor.  The fertility monitor drove us both insane and soon trying for a baby became another thing on a very long to do list.  After so long trying I think I’m pretty good now at reading my body and knowing when I ovulate so we’re going with that for the moment, and it has helped take some of the pressure off and we’re enjoying being a couple again and not just wannabe baby makers.

So many times people innocently ask about your family plans, but how rude is it when you think what they are really asking?  I have been just as guilty as anyone else, but after experiencing the disappointment involved in trying for a baby, I make a point of never raising the question to anyone else. You never know what another couple is going through and that question can be like a dagger straight to the heart.

We had a training day at work on Friday and the speaker finished with a picture of his young son and baby daughter.  They were both sat down looking into each other’s eyes in a beautiful tender moment.  My eyes welled up! As I blinked them away (seriously, I don’t want to be caught crying in a room with over a hundred of my colleagues), I wondered whether I will ever get to see the special bond that my son has built up with his own sibling.  I really hope so….

So where do we go from here? After initial tests have detected no concerns, I will be going back to the doctors shortly to begin a referral process to the gynaecologist and we’ll see what happens from there.  For 2014 my New Years Resolution is simple: I would like to be expecting a second baby by the time the year is out.  Fingers crossed I can keep it!

Image above courtesy of FreeDigitalPhotos.net.

Well i just loved the write up, you have explained everything really well and wrote by your heart, i can see all the real genuine feelings in it. Yes having the first child is always an awesome feeling :) , you are proud mother of your Son. Its been 3 years since you wrote this post, i would love to know further :)

Thanks for sharing this, stay blesssed!

Your post is really awesome thanks for sharing, i really loved it Infertility and embryology training

Your post beautifully sums up the emotions going through a woman wanting another kid. My wife and I have been lately pondering over the same thought after our 2 year old cute little daughter but my wife is kind of scared remembering all those things she went through.

Wow I could have written this post word for word. I would absolutely love another. My sis in law is the worst..."don't leave it too late / do you have any good news for us?" every few weeks. I want to shout "shut uuppppppppp!!!". I sincerely hope 2014 is your year xx