Its 8am and I am listening to the sounds of gaming coming from the bathroom. Usually this would be a cause for much concern, argument, and tantrums at this time of day, but that was before we got a Playbrush (Amazon: UK/US).

All parents battle with their kids about certain things; washing hands, homework, potty training, food, and teeth. Cleaning teeth is never fun for mum (or dad). The kids either don’t do it properly, don’t do it at all, or “lie” about whether they actually did it.

Come on mums – hands up whose done the “sniff” test to check that their kids breath smells minty fresh after they “say” they have cleaned their teeth?

Playbrush (UK/US) turns your kids toothbrush into a game controller, enabling them to play a game on their tablets/phones that helps them to clean their teeth properly, and actually means they look forward to brushing their teeth.

The company has three apps that your kids use while they are brushing. All of them are free. You can also use them to monitor brushing too; checking whether they are brushing well and everywhere in their mouth: 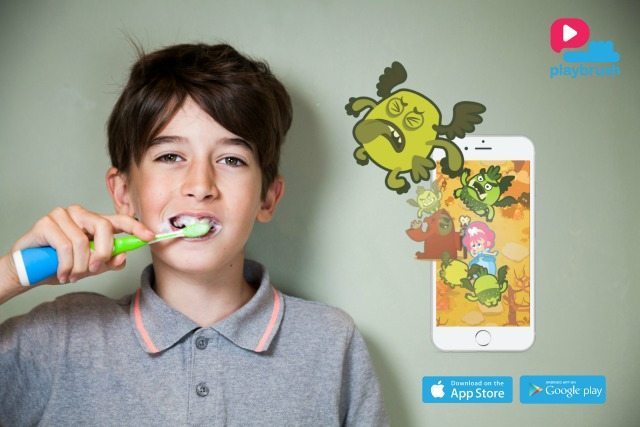 What did the kids think of Playbrush?

“I think it’s good as it shows you how to do your teeth, and you get highscores so you try harder and get better each time you brush.”

My kids brush their teeth without fuss now. Both of them love using it, though one prefers one app to another; but having three apps means that there is room for this to happen. My son, in particular, being a rather competitive soul, likes to try and beat the scores he has got previously. This encourages him to use the app above everything else.

My daughter likes playing it too, though says she thinks it is easier to use with an iPhone rather than her mini iPad. This means that the bathroom holdek that comes with the Playbrush bathroom kit version is a welcome addition to the Playbrush arsenal as it makes it a lot simpler to place the device safely in the bathroom.

Ours is under the mirror as you can see – when you get past my son’s smile that is….. 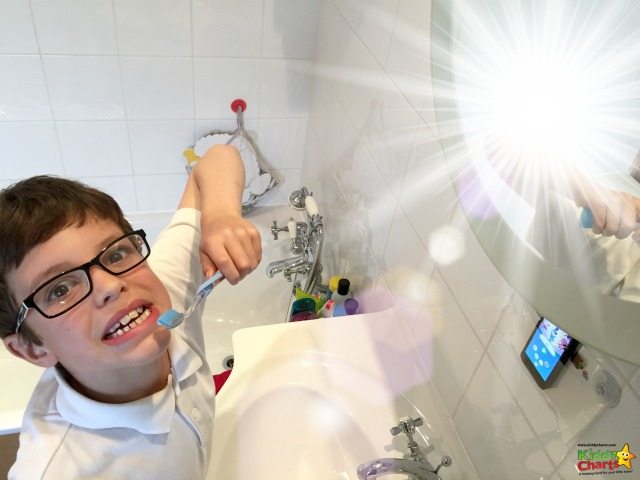 My son has a few things to say about the app for you all, just to help you a little bit…including a an small unboxing video, and even an opinion on it as well at the beginning….

I have to be honest, I didn’t think I was going to like this. I am old school. Kids should just brush their teeth, why do they need an app to help them was my old bird opinion….

…but, having used it, and seen how my kids really took to it, I think I just need to embrace the fact that modern kids do things differently to stone-age mums like me. They don’t NEED to have an app like this to get them to brush their teeth. There could be me nagging them, there could be shouting, and there could very well be the usual sneakiness that mums and dads get accross the country.

There doesn’t need to be though, because now we can use a Playbrush to help. I am all for technology making things easier, and this definitely does make things A LOT easier for both the kids and the adults when it comes to the witching hour.

Getting the kids ready for bed, and their teeth brushed, as well as everything lined up and ready for the morning is a tough enough job as it us for us mums, working or no. Why not be kind to yourself and spend a little extra (Amazon – £39.99 UK/US) for a less shouty evening?

Next time I hear space invader noises from the bathroom, I’ll be touched by that nostalgia for the good old days of Pacman, but I won’t be rushing to stop my kids from playing because I know it means that they are finally brushing their teeth properly. 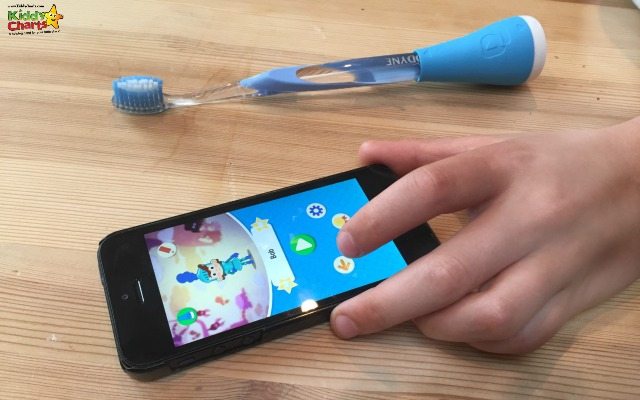 This is a sponsored review and contains some affiliate links.