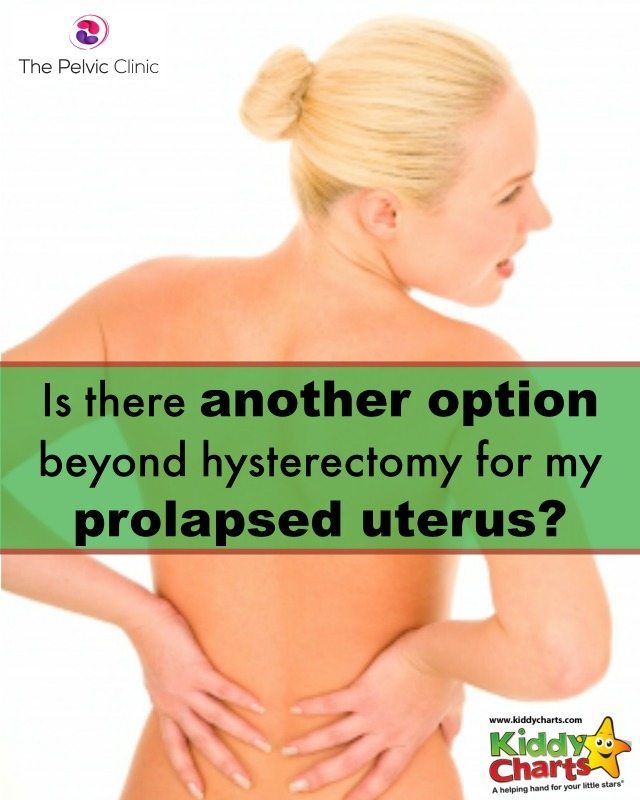 Forgive me for the graphic nature of this post, but it IS important to discuss these things. Prolasped uterus aren’t as un-usual as you might think, and its critical that women have a choice as to next steps. We’ve had an Easter craft post already this week, so I feel its OK to get a bit more serious today :-D

Two years ago, I had a hysterectomy – I was only thirty nine years old. Thankfully, I have already got two children, but the nature of my medical condition meant I didn’t have a choice, and I had to make that hard decision. It was difficult, despite already having two children, and it still remains hard that such an important decision in my life was taken out of my hands due to my health.

Medical science is now so advanced that previously, where a prolasped uterus was serious enough that a hysterectomy might be the only course of action – it is now possible to reposition the uterus using keyhole surgery through the Sacrohysteropexy procedure.

What is a prolapsed uterus?

I hadn’t a clue what this was until I was approach by The Pelvic Clinic to write this article. In essence, the muscles of the uterus aren’t strong enough to hold it in place, and it “slips” down inside the pelvis encroaching on our lady bits, or the vagina if you want the technical term ;-). It can also affect other organs too.

What are the symptons of a uterine prolapse?

These can be varied, but include:

For a full list of symptoms, do pop along to The Pelvic Clinic for more information, suffice to say it is un-pleasant, and clearly if we are experiencing these symptoms, we would very much like to be able to do something about it.

This is a surgical procedure that re-positions the uterus permanently, and it takes only around 30 minutes to perform. Mr Broome, who does the surgery at The Pelvic Clinic, is the first surgeon to have one of his patients go on to become pregnant and give birth after the operation. The surgery places mesh, designed not to break down in the body, inside to reposition the uterus. This mesh is attached to the cervix and tailbone firmly. Unusually, the Pelvic Clinc carries out its Sacrohysteropexy operations laparoscopically, or through keyhole surgery. This means that the recovery period after the operation is relatively short. Mr Broome recommends 2 weeks rest, with an average of 4-6 weeks total recovery. The clinic even reports that some patients have been back to their golf after only two weeks!

Why is the procedure improved at The Pevlic Clinic?

Sacrohysteropexy can be performed by introducing mesh through the vagina, which can cause more complications, as recently reported in the Scottish press. The Pelvic Clinc offers the procedure through keyhole surgery, where the mesh is introduce through a small incision in the bikini line. The operation has been performed by Mr Broome 1,000 times, with no ill effects, and he continues to regularly audit his work. This proceduare is NICE approved, and is not implicated in the Scottish discussions.

What would this mean for me?

If you are suffering from a prolapsed uterus, you have obviously been in some pain, and coupled with that may have felt you were faced with a hard choice – having to have a hysterectory. I know how difficult that choice is to make. However, perhaps with this procedure available at The Pelvic Clinic, it is a choice that you will no longer have to make?

Have you had experience of a prolapsed uterus, or perhaps you have had a Sacrohysteropexy? If so, we would love to hear from you, do help others looking at this as an option in the comments below.

Note: This post does not constitute medical advice. KiddyCharts have been sponsored to write and article on The Pelvic Clinic, but all content and opinions are my own, as are the hard experiences a hysterectomy involves.

Hi Helen, thanks for sharing this. I am reading your blog from the first post onwards at the moment. I think it is a shame for me that I only found your blog yesterday. It is a great blog!

Thank you for this post! I found it via Pinterest, I've had this diagnosis and I'd never heard a thing about it before! I've not been able to see my specialist yet (3 months since diagnosis) and Internet research can be so terrifying and disheartening. It was nice to see a little hope as I'm not even 30 yet. Thank you

Hi there, Really pleased that this was helpful for you. Remember that Dr Google is not always your friend....stay positive.