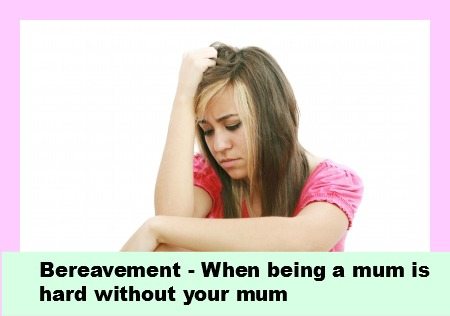 With the imminent arrival of her new baby, Andrea had to face the prospect that she may lose her own mother before she was to become a mum herself.  Here, Andrea tells us her story of bereavement. Be warned …. have a tissue ready ….

5 days before I was due to be induced I received a text from my Mum to say she had been admitted to hospital with dehydration. Just 5 weeks earlier she had been diagnosed with cancer, but she had assured me that although it was terminal, she could live for up to 5 years with treatment. I had taken her to hospital for her first appointments and I had arranged for my partner, Michael, to take her for her first radiotherapy appointment, by which time I should have given birth.

We had always had a difficult relationship, since my Dad left when I was 10 we clashed, but there was always an unspoken closeness between us, we were always there for each other when we needed it and we both saw Sophie’s birth as a chance to spend more time together. It was the new beginning we needed.

We visited Mum in hospital, and over the next couple of days she seemed to improve – she was upbeat and excited about Sophie’s imminent arrival. She said she thought my bump had dropped and I could go into labour naturally, and she gave me some money to buy something for Sophie with – she was really disappointed that she hadn’t been well enough to do it herself. We had arranged with the hospital that she would be allowed to visit us on the maternity ward, as long as she continued to feel well.

The day before my induction I received a call from the hospital asking me to come in straight away to see Mum, we rushed over and were told that she had developed an abscess on her remaining healthy lung, but because she had a tumour on her other lung it wasn’t strong enough to help her through it. When she saw me, her eyes lit up and she said ‘is she here?’ I knew she meant Sophie and I shook my head. She sank back into her pillow, with a devastated look on her face. The realisation that my Mum would never see my baby girl suddenly hit me. We sat with her for the next couple of hours and I held her hand as she took her last breath, all the time thinking about how she would never be a grandma.

She passed away at 6.50 in the evening. We went home and I began making plans for her funeral. I didn’t sleep that night. The next morning we visited a couple of funeral directors, I chose a coffin and booked the crematorium, I then booked the venue for the wake, then I made sure I had everything I needed to give birth and headed to the same hospital where I had watched my Mum die less than 24 hours earlier.

Have you had to face the difficulty of losing a parent while waiting to give birth?

I am a stay at home Mummy to our daughter, Sophie, aged 2.5 years. We live in Derbyshire, with my partner, Michael, and we love spending time outdoors as a family. I started my blog, All you need is love and cake, in May 2013 to share my love of baking, talk about our life as a family and give me something to stretch myself - there's only so much housework I could do without going completely insane! We also do reviews on a variety of different products and days out.

Being a mum without a mum is so hard. My mum died when I was 15, and whilst I have had more time to come to terms with the fact that my children will never know their Nanny, it is still hard every day. We often talk about my mum as 'Nanny Debbie,' and just this week my toddler asked if Nanny Debbie would be coming round. Heart-breaking every time. Thanks for writing about your experience.

My Mum was diagnosed with multiple myeloma (cancer) when my eldest Son was just 1 year old. She battled the cancer so very hard but sadly 3 years later she died when I was 7 months pregnant with my Daughter. Thankfully I'd had an amnio during this pregnancy & so the week before Mum died I was able to tell her she would have a Granddaughter who would have her name as a middle name. It upsets me that Mum hasn't been here over the last 11 years to watch her much loved Grandson grow into the young man he has become & it hurts that my Daughter & youngest Son never met her. Eldest Son has a photo of her by his bed & still talks about her to this day & my Daughter has so many of the wonderful character traits of my Mum it is uncanny. I miss her terribly!!

oh hunnie (((hugs))) I am so sorry your mother could not be there to meet your baby. My mom was having treatment for Cancer when my first son was born and that was hard enough. She passed away when he was 2 so never met any of the others.

You already know how incredibly brave I find this post, hun and how strong you are without really knowing it x

Thanks hun, although I don't agree ;)

Andrea, I found losing my own mum so tough, but this is so cruel, I really feel for you and your lovely mum. I found out mum had cancer while I was pregnant with my second, and she died two years later. I held my nephew she never got to meet and just cried and cried. I started writign down little legacies on Alexander residence blog so I could try and hold on the the stuff I wanted to share with my kids, and in doing so I learnt to live without her, but with her if that makes any sense? Big hug x

Thanks Penny, it was really tough at the time, but over time I have come to terms with it and dealt with it. Sorry you lost your mum too x