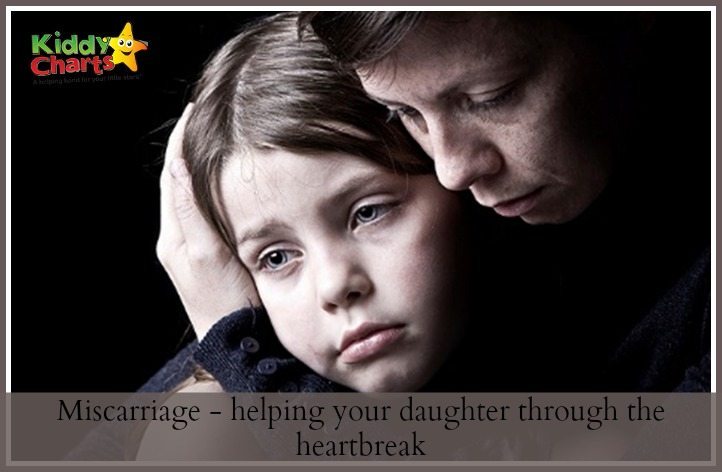 Finding out that your 18 year old daughter is pregnant is not always the best news in the world and I’ll admit to being shocked and saddened by it.  I’d always had a tricky relationship with her and it did feel like yet another blow in the storm that we were already going through.  However, she was with a nice young man, although the relationship was very new but he was sticking by her and that was what mattered.  She did need some stability in her life.  By this time, she was no longer living at home due to the strains we were experiencing and was sharing with friends.

Finding out a week or so later that she had miscarried the baby was hard, but we put it down to just one of those things.  I knew she wasn’t looking after herself properly and so we all felt it was her body’s way of saying “just wait a bit longer”.

A few months down the track and she was really getting herself sorted.  Her relationship was going well, we were getting on so much better and life seemed to be on the up.

She told me she was pregnant again, and this time we were both much happier.  She was due to go on holiday the week after and there seemed to be nothing that said she couldn’t go. While she was in Spain, she called me to say she had started to miscarry again.  We had to send some money over to her for the hospital costs, but she couldn’t afford the cost of the scan, so she just left the hospital without being checked.

She came home at the scheduled time and her doctor confirmed the loss.

For a then still 18 year old, this was a massive, devastating blow.  She’d come from a family of 2 sisters and 1 brother.  I had 3 younger brothers, and my own mother was from a large family.  Life just felt very cruel.

At 19, she took me aside again and said she was pregnant again.  We were cautious, and I bought her loads of supplements designed for expectant mums.  Sadly, it was as we had feared, and all our efforts seemed pointless; this baby was also not meant to be.

It was no surprise to me that she fell pregnant again soon afterwards.  I was the only one she told, and I used to dread my mobile ringing and seeing her name appear on the screen.

My heart would be in my mouth, and I was so reluctant to answer the phone just in case it meant bad news.

But of course, I couldn’t not answer her calls; she needed me.

The weeks went on, and the time came for her first scan.  I was so grateful that she asked me if I wanted to come along; I wanted to be part of this, and to help as much as I could.

Her partner couldn’t make it, as he was not able to get the time off work. She really did need to have somebody with her though. She was bracing herself for bad news, but as we went in and she had the doppler rubbed on her tummy, the most amazing miracle was obvious to be seen….the baby was thriving!  It was fair to say that we both cried our hearts nigh on leapt out at of our chests at the sight of that beautiful and welcoming image….

The months went on, and we all prepared. I was the dutiful gran and spoilt my prospective grandchild.  She went into labour naturally, and the most perfect baby boy was born. I was at the birth, as was her partner, and it was a truly magical moment.  We all blubbed, and then I left to give this new little family some well-earned space.

A couple of years went by.  I knew my daughter was desperate for a sibling for her young son, and I was not surprised when she announced last November that she was expecting again.  We were all delighted.  However, history repeated itself a couple of weeks later. With heavy heart, we heard that this baby was also lost, just before she was due her first midwife’s appointment.  She cancelled that appointment, and heard nothing else from the medics.

Around the beginning of this year, she called me again.

Another wonderful announcement that, yet again, she was pregnant.  My happiness was again tinged with that gnawing uncertainty.

Dare we believe that this baby could be, or will we have to endure another heart-breaking loss?

She would call me with her symptoms, and I would cheer when she told me she felt sick, her boobs felt very sore, and even the odd text when she was actually sick.  These all seemed to us both to be good signs that all was progessing well.

She had her first midwife appointment and the date for the first scan was booked. Unsurprisingly, she was very scared, and did call the early pregnancy unit (“EPU”) in the very early stages as she wanted to be certain.  She had bloods taken but due to a mess up somewhere along the line the results didn’t come through.  She had more bloods taken at the EPU later, but they couldn’t do an early scan until they had those results to see if the HCG levels (pregnancy hormones) were rising as they should.  They came back quite quickly. HCG levels were as they should be, so she was scanned and the formation of a new baby was shown to be starting.  FANTASTIC NEWS!!

She went away feeling a lot happier, and the symptoms continued though her boobs were still very sore and swollen.  The morning before her 12 week scan, she called to say she’d had a bit of spotting and back ache.  She’d called the EPU but they couldn’t fit her in for a scan. She did have one booked for the next day anyway.  She was told to rest for the remainder of the day.  Both myself and her partner went to the scan, and we were called into the scanning room.  I gave a little whoop when she asked if I could come in with her and the sonographer said yes.  I could see the smiles of the other expectant mums at my joy :-)

She hoisted herself onto the bed, and the sonographer ran the doppler over her tummy.  This time it was very different to her previous 12 week scan with her son; it was obvious to me that the sac was empty.

I could feel the tears brimming in my eyes, knowing what was going to be said.  At this time, my daughter was unaware but she’d already said to the sonographer that she was prepared for the worst.  It was a devastating blow when those words were said:

“I am so sorry, your pregnancy has failed”

My daughter lay there, saying she knew and she had prepared herself for the worse. As I was trying to fight back my own tears, her tears suddenly flowed.  Having to watch your daughter go through that pain is unimaginable.

We were placed into a room next door, thankfully we didn’t have to really walk past too many other mums, but those that did see us would have know something was very wrong.

After a while, a nurse from the EPU came in to go through things.  To make matters worse, the sac was too small and needed to be a larger size before they could “call it. This meant that my poor daughter would have to go back a week later for another scan.  How cruel can that be?  Protocol says that it could be a slow growth pregnancy, and they needed to wait to see if the sac grew “just in case.”

Sorry, but when you know you are looking at a blank screen, there has to be very little hope.

The actual miscarriage started the following Monday evening.  She called me to say that her partner was taking her to A&E because the loss was so extreme; it was just soaking through.  I met her down at the hospital and she was so terrified, she thought she was dying.

My heart was breaking for her, but had to keep it together.  I was actually scared I was going to lose my daughter too, as well as that chance for another grandchild.

She was cared for by a wonderful nurse who assured her that, as horrible and messy as it was, this was normal for a 12 week miscarriage and that it would soon ease.  She was given an injection to control the bleeding, and was advised that there was no more that they could do. They should go home to try to get some sleep.  She was given plenty of padding and mats for the bed, and left after 3 hours of being cared for.

This is so terribly devastating for her. I am in pain with the news that, yet again, another grandchild has been lost to me.

However, my grief cannot compare to hers. I don’t want to see her keep going through this, and my little grandson now seems to be a miracle child. I am sure that he will be loved and spoilt more because of it.

What for the future?  Who knows.  She has been told that investigations wouldn’t start until she has had 3 miscarriages in a row which means she would have go through it all again to potentially get some answers.  We had hoped that because she’d had 3 in a row previously, she would get seen sooner. Unfortunately, she has since been told that because she has had a live birth already, this won’t happen.

Through all of this, not once has she been offered any counselling or support.  It looks as though she has to go off to find her own support to get through it all. I ask myself if this can truly be right?

One thing is for certain though, I can’t watch her go through this again just because of bureaucracy.

Have you been through a similar experience?  Do you have any advice you can offer?

If you were touched by this post, then don’t forget to vote for us in the Britmums Brilliance in Blogging Awards Innovate category. Thanks so much :-D

Alison is a mum of 4 and grandma to 1. She works part time as a personal shopper, runs her own virtual assistance company and blogs at Walking in Grandmas Shoes.

I am so, so sorry

Accounts like this really help me understand something of the grief and trauma miscarriages cause, for women and their families. Thanks for sharing this.

Sometimes it is good to get it out in the open, I wish more people would share their experience so that a better understanding is created x

What a heartbreaking experience. I am so pleased you have shared this story so it gets told.

Heartbreaking. My heart goes for both mother and daughter

I'm so sorry to read about what a difficult time you've been going through. It sounds like you have been a huge support for your daughter and I know she will appreciate that hugely. I hope very much that she has no more heartbreak xx

Thanks Ruth, me too. She has decided to stop trying for a couple of years, give herself time to heal x