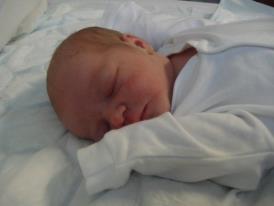 Continuing our series of posts on infant reflux, we have another guest blogger. Susanne Remic is a trained primary school teacher, currently working for Babyhuddle. She is a mother of three and blogs at Ghostwritermummy and is also co-creator of Maternity Matters. She tells the story of her son, who suffered from infant reflux almost as soon as he was born.

So what’s this infant reflux thing?

I’d never heard of Reflux before I had my son. I hadn’t needed to. He was born 8 days after my due date by emergency section, plucked from my body while I was out cold. It wasn’t the best start. I guessed the general anaesthetic had had an effect on him in the hospital; the first time I saw my son, he was a ball of fury. It didn’t really change much from then on.

We went home in a blur and I will admit that the way my son was born affected me deeply. It broke me. I found his crying unbearable and would often join in. I was convinced that he was as unhappy as me. It never really occurred to me that he was crying excessively since I was crying excessively too. I remember my health visitor coming to see me on Christmas Eve when my son was 11 days old and she saw him projectile vomit his latest feed all across the room. That was the first time I heard the word.

As much as his birth did, Reflux dominated our lives. We weren’t first time parents. We were supposed to know what was coming with a newborn baby. But this baby was different. He never slept. Day and night, he would manage only 40 minutes at a time and would then wake, screaming. I became a physical and emotional wreck very quickly. I scoured the internet and books for information, guidance, some kind of advice or knowledge that would tell me when this would end. It wasn’t just the sleep, either, it was the feeding. If he was awake, he’d want to feed constantly, and that meant I was pinned to the sofa with him for hours. As soon as he fed, he would be sick and then it would all start again…

Please listen to me….

When he was three weeks old, I’d taken him to the GP around 6 separate times and had finally found a doctor who would listen. We were prescribed Gaviscon and so the meds began. The Gaviscon was a faff. We had to mix a sachet with some expressed breast milk and then give it to him via a syringe. This made him furious. I would then feed him, he would be sick, we would start again… The Gaviscon also made him constipated to the point where he was in so much pain. One night he screamed and screamed and SCREAMED from 11pm to 6am without stopping. The minute the health centre opened, I took him. I don’t know what I wanted really. Someone to listen to me, to realise that there was something wrong.

I was taken into a side room and questioned about my son, whether I was looking after myself and why I was so upset. From that day onwards, I was asked to take a Post Natal Depression test no less than four times. Still nobody was taking me seriously.

We ditched the Gaviscon and I began to do some research of my own, soon finding that Ranitidine was the stuff we needed. My son ticked all the boxes. He would cry so much. He pulled his knees up into his chest, clenched his fists and comfort fed. He would bring up all of his feeds ALL the time and he looked so miserable it was untrue. I’ve never felt so helpless, seeing him in so much pain, and feeling powerless to help him.

Being told that he would grow out of it soon just wasn’t enough and we ended up at the GP’s almost every day until he was 12 weeks old. We started some sessions with a cranial osteopath (not on the NHS), and at the same time we were started on Ranitidine, finally. Because he was so small, the GP wanted to refer him to the hospital too, so at last we felt we were being listened to.

The first appointment at the hospital was an eye opener. We were told that it was likely my son had a milk intolerance and that I should try going dairy free if I wanted to carry on breastfeeding. We were prescribed Omeprazole on top of the Ranitidine (both antacids) and Domperidone – a motility drug that intended to push food through the body more quickly to prevent vomiting. We were also told to get my son onto solid food as soon as he reached 16 weeks old because this would help to keep food in his stomach too.

At first, the Ranitidine made little difference and the Domperidone only meant that my son filled his nappies constantly. We were still haunted by pools of vomit and screams of pain. Our next visit to the hospital saw us faced with a decision – my son was so underweight that he would need hospitalisation unless I stopped breastfeeding and switched to formula. Even my GP agreed. And so began the trialling of formula. In the end we settled with Cow and Gate Comfort because he seemed to be less sick on that. Still sick, just less so.

We weaned onto solid food, but he hated it. He got to the point where food equalled pain and so he would scream as soon as the bowl came out of the cupboard. He would kick, scream and squirm and ate so little that his weight really concerned me. By six months he had been ‘weaning’ for two months but still ate hardly anything. He also still slept badly. If he was in his car seat, he would get a little more sleep because he was upright. We also made sure his cot was on an incline, as was any seat we put him in. We would try to keep him upright for as long as possible after feeds and we gave him his meds religiously. Still nothing seemed to work.

There were really low points. Throughout his hospital appointments, we were referred to a dietitian who told us he was likely to be lactose intolerant. His formula was switched and he needed regular blood tests and other testing to try and get a firm diagnosis. He was prescribed an inhaler for his croup and wheezing and special scream for his eczema. One night we ended up in A&E, at a total loss as to what to do with him… those were the low points.

But there were high points too. When he was 8 months old, he slept through the night. Only the once, but still! He also learnt to walk pretty early on and by ten months was a confident walker and, as the doctors predicted, he was sick less when he was upright. 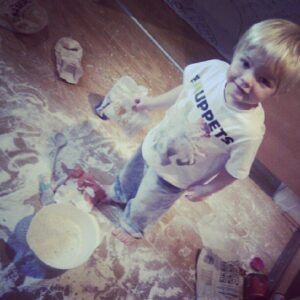 But he was still sick a lot and he still suffered from loose nappies and severe bouts of tummy pain. Today, he is 3 and we are still under consultant care both at our local hospital and Alder Hey. It’s since been decided that Lactose intolerance was an incorrect diagnosis and that my son was cow’s milk intolerant all along. We’vedone ‘the challenge’ and he now eats a normal dairy diet. He also no longer needs his medication, which is fantastic. Every now and then he suffers with tummy ache and sometimes tells me that he has an ache in his chest, meaning the reflux has reared it’s ugly head again. But on the whole, he is now fine.

Infant reflux took away so much from us all….

Reflux claimed so much of our lives for so long and the effects are still evident. When my youngest was newborn, each time she was sick my heart plummeted and I knew that I wouldn’t be able to go through it all again. It’s not just seeing your baby in pain, it’s battling to get the doctors to listen and to understand. It’s not being able to enjoy your baby. Standing outside his room listening to him breathing- wheezing- and coughing and waiting for the inevitable screaming to start.

It’s so lonely and isolating and overwhelming.

It means you can’t go anywhere without four changes of clothing and a host of medication.

It means you are misunderstood by so many.

It means you feel powerless to help the one person who relies so heavily on you.

A hearth-wrenching tale from Susanne I am sure you will agree. Wonderful to hear that her boy is much better, but it breaks my heart to hear of the pain that she and the little one suffered. Help to make more people aware and share this if you can. And if you know the pain of infant reflux, do get in touch.

I like reading your story, when my child is still a baby they had this infant reflux and keep on crying. Also, as a parent you would worry too much because you don't have any idea how to stop them crying. And now everything is okay with my child and my family. Thanks for this wonderful thoughts.

I know how you feel, you are not alone. my little girl was the same her reflux started at two weeks of age she is 20 mths now and we are still suffering the long term effects. if you want to talk or know more please email me :) it seems no one understands the level of suffering even well ment kind regards can rip your heart open, for what others may never experence. you survive because there is no other option, you go on when it seems impossible and so does your baby. it builds strength deep un moveble strength inside, once you realise you are a wonderful parent you have done the best you can do, given all of yourself to your baby in need

Thanks for sharing. It's not something we've experienced but it will help me understand if friends children suffer x

Oh Gosh...so sad. We spent a lot of time in hospital with my son when he was young too and it is lonely everyone else out and about and you just worried sick about your liittle one. Glad things are better Good luck Suzanne

oh gosh reflux sounds terrible. I feel very lucky that I've never had to deal with it.