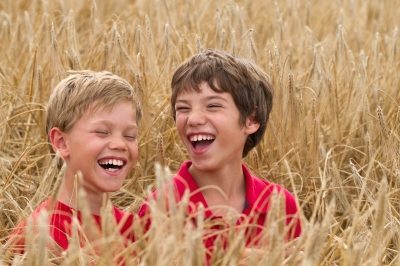 Coeliac disease in kids: wheat doesn’t always have this effect on kids….

Aili was born 6 weeks prematurely and as her mother, Linda of Gluten Free – UAE, puts it, she:

“Was never an easy child…”

Aili didn’t sleep well, was hot -tempered and generally difficult.  Aili also suffered endlessly from constipation but this was put down to her being premature and her digestive system not being developed.  When Aili was weaned, she refused most foods and didn’t eat anything properly until she was a year old and then it was only a small amount.

Aili suffered from endless colds, coughs, tummy bugs and was even hospitalised with the respiratory syncytial virus, RSV.  Thankfully, she recovered but then stopped growing, cried more than ever and wouldn’t sit and play even for a few minutes.  Aili’s parents where informed that children can take a long time to recover from RSV so they struggled on assuming that was the reason why she wasn’t thriving.

More infections, diarrhoea and constipation followed.  Her mother kept breast-feeding, as it seemed to be the only thing Aili wanted.  Her stomach was always bloated and as Aili started talking she would tell her parents that her stomach hurt.  More trips to the doctor’s surgery followed and lots of tests along with yet more diarrhoea and vomiting, sometimes both at once.

At one point, Aili became dehydrated and her iron levels were so low a transfusion was recommended but her parents still didn’t have a reason why this was happening to their little girl.

Finally, one of the test results came back and it was positive on 3 out of 4 markers for coeliac.  That was enough for her parents to take Aili off gluten and within days she was calmer, the crying eased and she would sit and play with her brother for short periods.

You’ll understand why that made her mother cry….

In her mother’s words:

“Her bad temper calmed down and she seemed a little bit to us like someone had given her a tranquiliser.”

Aili is now a happy, growing 3 year old who no longer has stomach pains.

Coeliac UK explains the signs a  “typical” child with coeliac disease presents with include:-

If coeliac disease is suspected a blood test will be taken but it’s vital that gluten must be eaten for a period of 6 weeks prior to testing.  Following on from this a biopsy may be taken.

There is no cure for coeliac disease but going on a gluten-free diet should help to cure the symptoms in a short period of time. Adapting your child’s diet can be challenging and symptoms are likely to re-occur if gluten re-enters their diet.  But there’s lots of help available from organisations like Coeliac UK and a friendly gluten free community is available on social media.  There’s also an increasingly wide range of gluten free products, ingredients and recipes for making your own gluten-free meals at home.

Please note that Maria is not a doctor. If you suspect that your child may have Coeliac Disease, you should seek medical advice before removing gluten from their diet. This article is not meant as a definitive guide it’s a review of the research carried out from the websites below and from personal accounts.

This is the second of our guest posts from Maria Brannigan over on Gluten Free and Gorgeous; which gives advice, and tips of living with a wheat intolerance, as well as some rather scrummy recipes.

great post about Coeliac disease! very informative!! it will help me a lot!! keep it up and keep going! :)