Gingerbread is thought to be the oldest biscuit there is.  Ginger has been used as a preservative for hundreds of years and the spices are said to warm the blood.  In fact gingerbread dates back to ancient times when ginger was known for its medicinal properties, often used as a cure for stomach aches – ginger products are still recommended to help in particular with morning sickness during pregnancy (now there’s a good excuse for gingerbread if ever I heard one!)

History of the Gingerbread

Crusaders returning from the Middle East in the 11th Century brought the new spice with them and, as the cost of the ingredients and spices dropped, gingerbreads slowly became more popular across Europe & Britain.  The English added breadcrumbs to the recipes and in the 16th & 17th centuries, flour replaced the breadcrumbs to make gingerbread lighter and more like the version we know today.

It is said that important visitors to the court of Queen Elizabeth I were impressed with gingerbread portraits – so this is where the first gingerbread men were made!

The Brothers Grimm’s fairytale of Hansel and Gretel in the early 1800’s inspired the tradition of baking gingerbread houses and, as Christmas became more commercial over the years, gingerbread biscuits and decorations became an integral part of the season.

This is a recipe I’ve adapted from trying out different ones – I use cinnamon as well as ginger because I love the smell and taste of the cinnamon at Christmas-time.  I’ve found that this is a good strong recipe to make houses from as well, as you want the house to stand up, not bend under the weight of your sweets!

(and don’t worry about being too precise – a few grams either way will be just as delicious :-) )

Have fun and enjoy! 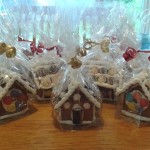 Mum of 3 & keen advocate of getting kids cooking & baking at home & in school. Usually end up doing quite a bit of gingerbread at Christmas and as a project with the Year 1's in school each year. Love baking and decorating cakes, dream of being organised, tidy & sorted - but our kids have other ideas ;-) Will at some point learnt to get to say 'no' to things, get to bed at a sensible time and make myself a priority once in a while. Or maybe not... I'm a mum, after all...! ;-)

We are a social enterprise – Donate now