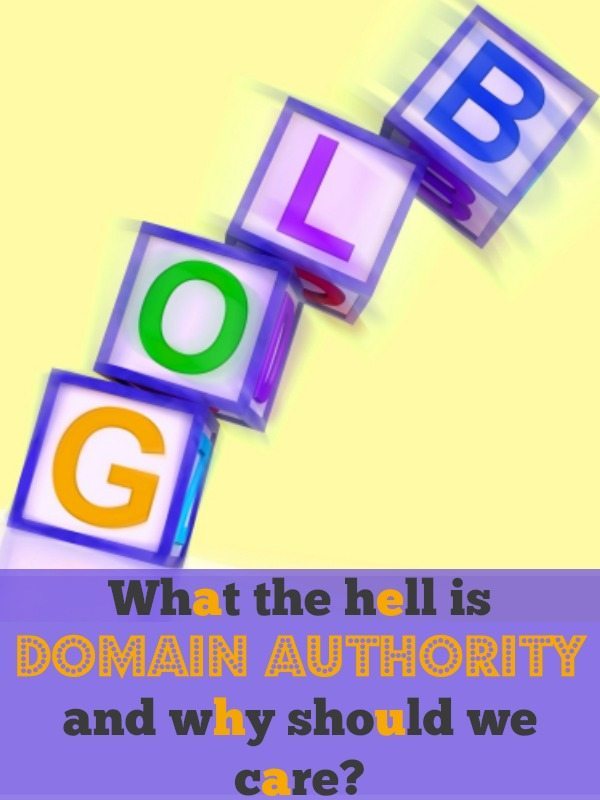 That is a question I ask myself all the time…

I have asked people who know, I have thought I knew, and I have looked at it with my sonic screw driver in my hand (you’ve got to be in the right frame of mind, obviously) for a hell of a long time – but NEVER ONCE did I actually think to write it down…to note what it was at a particular given date.

I have ideas on what effects domain authority:

A lot of these impact the nebulous toolbar Google Page Rank too; which some are suggesting may never be updated again. This, in turn, means that all of these things will help you to be seen more by people searching Google. If you are a parent blogger, like me, then your MozRank, with is based partly on your domain authority, also affects your Tots100 ranking as well. She says, hoping that this is still true, and she hasn’t killed any pixies by just mentioning it….

In addition, organisations sometimes use domain authority as a way to determine whether your site is trustworthy, and has a good reputation. If it is above specific values, it can affect whether brands, and PRs want to work with your organisation. I have always used link explorer (OSE) to check domain authority pretty regularly for free. My browser of choice is Chrome too, and so I have the Moz Chrome extension running which enables you to check Moz rankings in your browser while fiddling about on t’interweb.

So last week when I looked at it and the domain authority for kiddycharts.com had fallen a massive FIVE when it had been steadily climbing for months, I asked other bloggers, and website owners if they had seen something similar, was there a domain authority change a foot? Many people wouldn’t have bothered, but I like numbers, me.

I found out that other websites had seen significant domain authority changes too. Sites around my wee circle of friends and fellow bloggers suffered similar tumbles to me, and were just as confused.

My other metrics were roughly the same. For example, my MozRank wasn’t affected. Or, at least, I thought that other metrics were OK because I didn’t actually ever write down any of these numbers, I just remembered….and we all know what my memory is like *speaks woman who uses her nine-year old to remember stuff*

I was ashamed – I was a business analyst for christ sake – how could I possibly FORGET to write down some numbers. I LOVE numbers. What was I thinking of?

Was there really anything happening with domain authority – who knows?

I was reliably informed that domain authority fluctuates all the time, and even the lovely man that fiddles with my IT said it was probably because I was rather stupid last week and accidentally deleted an ID on my website. This put lots of my posts automatically into the bin. This is not good as it creates lots of crawler errors on my site, apparently *looks for creepy creatures all over the PC*

However, I still wasn’t sure what was going on. I wasn’t doing anything different, so I tweeted the lovely people at Moz who do whizzy stuff with elves, fairies and other magical creatures to determine the Domain Authority metric and asked them;you can do the same too by emailing help@moz.com.

@KiddyCharts We had an index update last week and many are reporting DA changes.

I even put in a support ticker for the query as well *dons geek hat.*

I was fully expecting to be ignored because:

b) I really don’t know what I am talking about

c) There was an update to the index and perhaps that was what caused the drop – but five, well that just wasn’t fair, right?

I was wrong, they listened,

This is what Moz support told me after a couple of days of queries from me….

“We had our data engineers look into this, as it seemed to have caused this issue with a few customers. They’ve discovered that the increased size of the index [from an update on the 29th Oct] did have an unintended side effect for computing PA and DA. It doesn’t affect a large number of domains in the index, but some domains will see decreased numbers as a result. We’re working to correct it and hopefully this will be fixed by the next time an index goes live.

For now, take a peek at the number of root domains that link to your root domain. If that number has remained more or less the same since the previous index, you can rest assured that your true DA is about the same as it was in the previous index, and that your DA should be back to normal once this is fixed. If that number has decreased, however, it means that the drop in DA is likely accurate.”

Keep a record of your domain authority and your link profile – don’t get caught out like me….

In other words, the recent changes to the Moz index has possibly caused a change in some of the domain authorities within that index, including for the kiddycharts.com domain….potentially. However, I don’t know because I have no idea what my numbers were before…

Conclusion…I am a muppet and don’t keep accurate enough stats for my site other than what’s in my head, I can’t actually be sure whether it’s the changes to the index or just a normal fluctuation in scores. *WAHM fail*

Dam. I could have asked my daughter if she remembered what my domain authority rank from Moz was last week, but she would likely have just said…

“Who’s Moz mummy, is he a cartoon character?”

Now, I have a spreadsheet, and I am not letting Moz and its pesky domain authority slip through these fingers again…. *bit late sunshine.* I advise you to do the same too, you never know when numbers and spreadsheets can come in handy. We can’t keep relying on nine-year olds and their memory now, can we?

Because I am a nice lady – here is a template for the forthcoming year as well – now you don’t have any excuses to keep track now do you – five minute job once you have downloaded it, isn’t it? 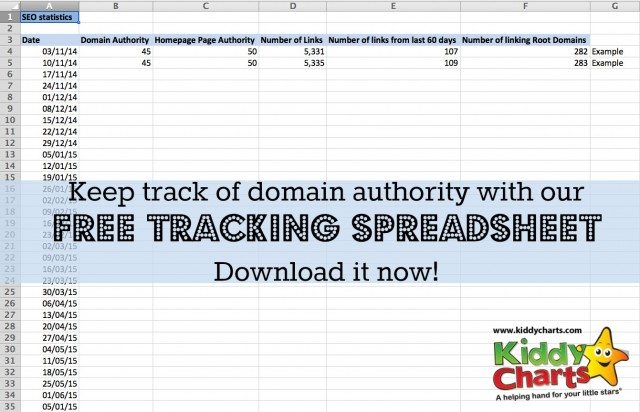 Are you a professional website owner or blogger? Do you track your SEO related statistics? If not, why not? You could save yourself a headache you know….as well as stop yourself from having to kick the nearest cat, or ask a nine-year old for help. Always something worth avoiding I can tell you.

Hey, thank you very much for making it all simple. I was much confused about the term Domain Authority. I'll pay attention towards my DA from now on. Thank you for the spreadsheet.

I was unaware of the domain authority and how to increase it too. But after reading your article i came to know, what it is and it’s importance. I will try to follow the footprints in order to increase my domain authority. Few quality links are better that 100 of poor link, this is what i am going to follow.

thanks for the helpful information,it seems like doing great and on track on your blog, learn a lot from an expert blogger like yours, didn't pay attention to da until just recently I have search how important to keep track on your stats, thanks.

Wow a well detailed and interesting post. I learnt alot from this.

Hi Helen, A very interesting article and a very nice surprise (for me) that I ended up here. Domain Authority was something I hadn't even considered, but is definitely something worth investigating as I love writing about some of the more obscure sides of running websites. Hope things sort themselves out for you. Regards,