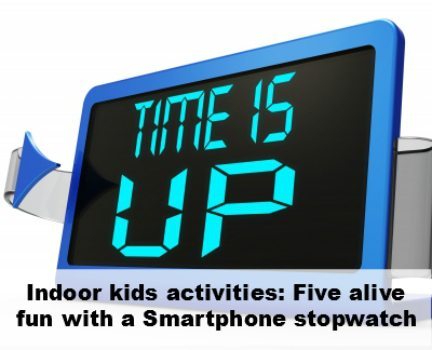 Smartphones can be annoying – on the other hand they can be a great way to entertain the kids, and I don’t just mean handing them the phone, and letting them use your Angry Birds App at the first opportunity. We have discovered a much better use for them – and anything else than allows you to time somebody…our wee game “Five Alive”.

Its a great activity for indoors, so on the train, or as we found invaluable recently, on the ferry to France….

Stopwatch – easily available these days on those clever wee smartphones, but you could just use the second hand on a watch too of course

Pencil and paper (not required)

A great game to pass the time anywhere – to get more competitive, you can always see if you can beat your opponents’s time rather than your own. However, when we did, the whole game became slightly less serene, and I am not too sure that the people next to us on board the ferry were too impressed….! ;-)

Ages 4 and up – the younger players may struggle with thinking of their five choices within the a set – but they can still have fun – promise!

What do you think? Would this work for your kids too? Do you have any other games to play with the timers on your smartphones? Or are you just a wee bit scared to hand them over! ;-)

Nice tips- I haven't yet had the courage to let my boys use my iPhone. They still think it is my brothers and that I only borrow it occassionally.