Last week, Stuntboy, Chatterbox and I sauntered off into London for an event with their beloved Moshi Monsters…more of that later on the blog.

I admit I was wondering what on earth we were going to do there for two hours, but I really need not have worried because we discovered that there is an awful lot you can do when you’re a small person for free in Trafalgar Square…we adults just don’t have the same perspective on the world now do we?

Sadly I got no photos of this one…I think I was too slow on the draw after Stuntboy whizzed passed me chasing some of the poor birds past me. Next time I need to get that phone/camera out of the hand bag a dam sight faster

Clearly there are Lions in Trafalgar Square, they are, in fact, rather iconic aren’t they? Didn’t stop my two trying to work out how to climb on them despite the plinth for Nelson’s Column being a good bit taller than either of their heads… 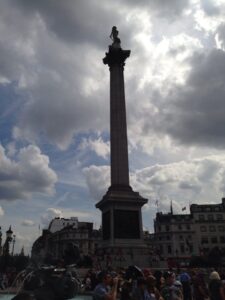 Sorry, that isn’t strictly true, they didn’t really “Shin” up it all, just the plinth at the bottom and then the steps around it, but it was bloomin’ difficult for me to get up there – I knew those Little Gym classes for them both would come in handy in the end.

This also occurred around the bottom of Nelson’s Column *spot the theme* and involved mummy sitting still (phew), while the small people in her life ran around and around trying to catch each other. At some point, I was informed I needed to tag them as they ran past. Even I can manage to reach out once in a while as a small blur runs past…usually…

5. Playing in the fountains

Probably not very hygenic this one, but messing about with water is always a hit wherever you are, and Trafalgar Square is no different at all

This seemed to take up much more time that I had anticipated, but getting one’s shoes off and walking around Trafalgar Square, getting mucky, but making footprints on the paving slabs, keeps kids happy for ages *result*

I was not expecting this, but then I hadn’t read the news recently, had I? And if you haven’t, you might want to take a sneak peak at this picture for a proper look-see…

I would post the picture here, but suspect I am not allowed to due to copyright, and I really don’t want to annoy anyone that’s friends with a bright blue cock, would you?

I hadn’t anticipated that there would be entertainers infront of the National Gallery – should have realised that there would be. They were brilliant, and the kids were transfixed by them. Once one lot had finished, there was another, then another…it was like some early stage of Britain’s Got Talent to the children. And they LOVED IT! 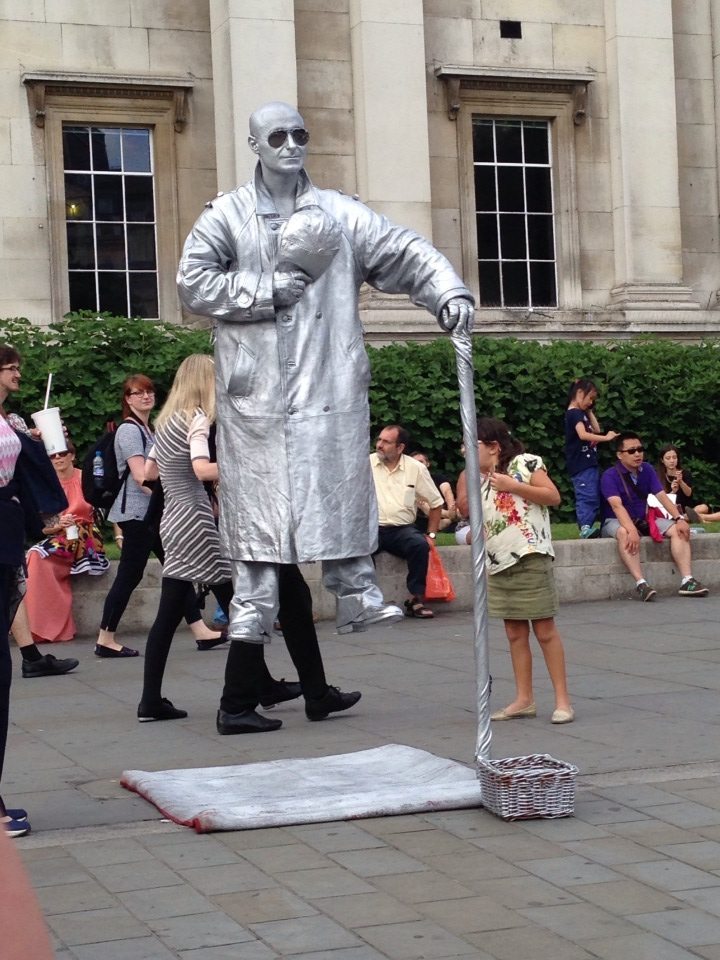 The kids had no idea what to make of this fellow…

What would you do for free in Trafalgar Square? Any ideas and thoughts a great help – as well as anything else free in London generally, always up for more tips!

that is so sweet here is blog about international scholarships

The entertainers in London are definitely the best thing! Watching them as a kid is the best aha

London with kids isn't for the faint of heart! Thanks for the guide!

great free fun, need to take the kids to do this!

I was drawn in by free things to do! Do they really let you paddle in the water? I was always under the impression I'd be lynched if caught in there - I thought it was just a student thing!