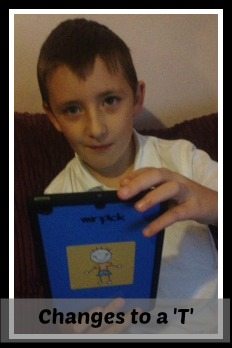 Not that I don’t love him as much as D, of course I do and more.  He’s our first child together, our little man who can change his moods like the winds (and there’s been a lot of that recently) but who will also find humour in the smallest of things, sometimes.

He copes very well in mainstream school, in a class where the teacher knows that he will more-than-likely finish the work before everyone else and then need more stimulation, his brain is like a sponge, constantly absorbing, ever needing facts and stats.

Recently changes have been affecting T, some we can manage and others we can’t.  He’s had to develop a new (temporary, I hope) coping mechanism – that of his ipad and football videos.

T is a very sporty little man, as well as enjoying participating in sports, he enjoys watching it and collecting statistics.  Ask him about any player in the Premier League and he can tell you who they play for, which team they used to play for, yellows/red cards accumulated and their nationality.

Lately, his playing has been non-existent, pitches and car parks are still inaccessible and he informed me the other day that he hasn’t played a game for 12 weeks – two summer holidays worth!  For a child who relies on sport as one of his coping strategies, this is a big thing.

The management of his football team has suddenly changed too, a necessary action as there’s a bitter separation at the heart of it, with fallout.

Another is our trampoline in the garden, he LOVES to be out there bouncing with a ball, commentating as he’s goes, as if he’s commentating on a game.  Sometimes he’ll be watching a football match on TV and the tension of it all gets a bit much and he’ll head out and bounce, coming in happier and more comfortable.  The recent weather and the fact our garden looks like someone has been constantly mud-fighting has meant he’s not outside as much.

And then there’s secondary school, we find out on Monday (it’s been a long few months since decision time) where he could be spending the next few years.  Whichever school has been allocated, there will be a journey, either by school bus, train or a horribly long walk.  There may have to be an appeal process too, it’s all adding to the uncertainty.

But through it all, our little man is “coping” – just.  Once the football games are back on, the school place is known and the routine is back, I’ll be able to gently wean him off his football videos.  But for now, it’s helping him cope and we’re very proud of him.

Mine uses Minecraft videos for the same reason! Bless them. Hope you get good news on the school front. Mine changed in September just before he was 10- we have the middle school system- and it has been a little bit of a bumpy ride, but he seems to have settled into the new routine now.

I'm up waiting too, best of luck and hope you do not have to appeal.