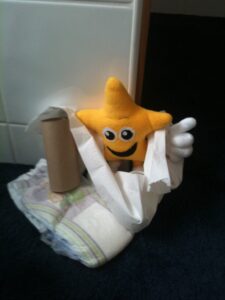 Little Star getting ready for potty training: he seems to be getting in a bit of a mess!

This is another guest post from Maria Albertsen as part of our series of Thursday Thoughts for Parenting Behavioural Challenges. We hope it gives you some guidance.

I don’t know about you, but even when I just thought about potty training, I felt like some of my energy was being zapped from me and wondered how many times I would have the mop and bucket out! If your in the throes of it now, or indeed you are thinking about it like me; try building one of our potty training charts for both girls and boys to help you out, and follow our tips below too.

I’ve got two boys , 4 years and 2 years old. The average age for parents to begin potty training is between 2-3 years of age, some brave parents even try before this! And often parents are worried if their child doesn’t seem ready until after 3 years old. The truth is, every child is different and there is no right age. Health professionals often don’t worry that something may be wrong until a child is over 4 years old! So there really is no need to worry if your child seems a little late.

When my youngest son was just 2 years old, I thought I’d give potty training a go but he just wee’d and poo’d everywhere! For a couple of days I tried to ‘force’ him to go on the potty but we just had tantrums and tears (from me too!) as both myself, my child and the house became a big smelly mess! I decided quickly to stop, for fear of traumatising him, so I put a nappy back on him and decided I would let him take control of it. I’d let him tell me when he was ready, and he did, when he was 3 years and 4 months old! He simply took his nappy off and said, ‘I’m going on the toilet’ and he did! I was amazed. That day I asked if he wanted to keep his nappy off and he said yes and he only had 3 accidents, tiny wee’s on the floor, the rest all went in the toilet. He didn’t even want a potty, just straight ion the loo. It was amazing, except one thing….he kept his poo in! He would wait until a nappy was on him each evening for bed and then poo, again I left him. Then on his 4th birthday he said big boys didn’t poo in a nappy and he would do his on the toilet, and he did! The very next day he just poo’d on the toilet like he’d done it all his life!

My youngest son is two and a half and has just started showing some signs of being ready to potty train, but I have a sneaky feeling, this little chappy ain’t gonna be so easy! He is very different to his brother, in every way!

Let your child watch you going to the toilet and let this happen from birth.

I had no choice in the matter really, as I guess many parents don’t. My children simply follow me there anyway! Sometimes, I just want to hide in the loo for 5 minutes peace but oh no, I’m apparently not allowed!

While they are in there with you, let them flush the chain, wash their hands too etc, as it all keeps them familiar with the process. When you’ve been, ask them if they would like to go next. Sit them on the toilet if they say yes, even if they don’t actually do anything, it’s all good practice. The more familiar they are with the toilet, the more relaxed they will feel about going.

How do you feel about potty training? Are you dreading it? Do you have any tips if yu have been there done that? Let us know below.

Some great advice here, as a Mum of 2 boys as well I am definitely going to go for the wait until he tells me and takes his nappy off option with my youngest. My elder son is 4 in October and still has small wet patches frequently in his pants, we started training him about a year ago, when he showed a lot of the signs but had not said himself he was ready or taken his nappy off himself. I am hoping with waiting until the younger one tells me will mean he is well and truly ready! Time will tell....