Playing in the snow – is there anything else like it?

And we all have snow boots that I got in the sale, so no one complained about cold feet including me….

In fact, looking around the playground today it wasn’t always easy to tell who was more excited; the children or the adults! The children, of course, are secretly, or in some cases quite openly, hoping the school will close. Not sure it will, but I said to another Mum they will remember going to school in the snow and being able to play out in it.

The youngest class, which my four year old is in, had been outside this afternoon doing lots of language associated with the snow, winter and cold.

That would explain how tired he was, and the tears when the snowball he was trying to roll all the way home from school kept breaking.  We must have looked a bit odd, as I was carrying 2 bags with school shoes in, and carrying a big snowball, while trying to chivvy along a four year old, who was also trying to roll and carry another snowball, and supervise two older kids in their excitement; not quite knowing where the edge of the foot path was. 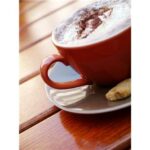 Playing in the snow – doesn’t that call for hot chocolate afterwards?

But do you know what? Who cares! It was fun mostly, other than the shouting about broken snowballs, and when we got home, Daddy had been sent back from the office to work from home, so he was there too. After some more playing with the sledges, it was a time for hot chocolate. There are just some things I love about the cold weather.

I know I will remember how much the children loved the snow when I am old and grey.

And there was more forecast for last night too….

Did you get out to play in the snow – do tell us about it below.