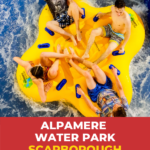 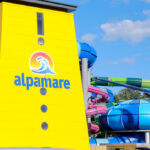 Free tickets provided in return for a review; all opinions our own.

Alpamere Water Park is located a short ten minute walk from the North Bay area of Scarborough on the Yorkshire coast. The water park was opened in 2016, and cost £14m to build; a Spa followed in 2017. The addition of the Wellness Spa at Alpamere means that there is something for families, and other travellers at the location now.

What is there at Alpamere Water Park for families?

Alpamere Water Park has very much been designed with families in mind, and the facilities here are excellent. There are plenty of changing rooms, and an amazing quantity of activities for the kids. Tickets are £21 per adult, and £16.50 for children (up to the age of 16). Family tickets (two adults and two children) cost £66.

The facilities within the park are excellent and include four slides, two outdoor pools, a large play area and wave pool indoors.

This is a fantastic “toboggan run” for a single rider; positioned head-first on the slide.

The hardest part of this ride, for an old person like me, is to work out how to get onto the mat that you go down the slide on!

This is a great ride, which both out kids loved to do on their own.

This is a double man tube which allows for a few turns and twists on the way down. Nothing too dangerous though. Great fun for the kids and the adults alike.

This was an intermediate run – so something for the slightly older kids, but not too scary.

This is a fabulous four man tube run, which is perfect for all the family, though it is possible for two and three people to go on the ride.

This is the only slide that doesn’t require a mat or a tube, and is for a single person. Despite it being totally in the dark, it is also an intermediate run.

My son said of this ride:

Mum – don’t – you aren’t a big fan of slides – well don’t do this one, I think you wouldn’t like it as it is totally in the dark.

However, when mum did go on it:

It was actually quite relaxing!

Perhaps after the suggestion it’d be scary it was a little tame?!?

Make sure you do give it a go at least once though. It could be a little disorientating going down in the dark, but it was so smooth; it was no problem 😂

There was NO queueing while we were there; which was excellent.

However, we were lucky enough to attend on the Friday. A day before the half term officially started because our kids had an inset day.

One can imagine that within peak times in the summer, after school, and during the half term holidays, there are definitely queues. It is well worth taking this into account when you go. It could be that going earlier, and later in the day would be likely to reduce queuing.

Also it’s worth noting that the two and four man rafts can be quite heavy, so the kids will definitely need a little bit of help carrying them up the stairs to the slides.

In addition, the signs are a little difficult to understand directing to the different slides.

It’d be great if there were some arrows at the top of the stairs so everyone can see exactly where they need to go!

The outdoor pools at Alpamere Water Park are both heated to 35 degrees making them feel wonderfully warm, even in the rain that we had to endure for the entire time we were there.

There is one swimming pool, and another pool which includes an area you can can back and relax in, showers, and even a set of jacuzzis on the far side.

Unfortunately, when we visited the swimming pool was far too cold, and it really wasn’t possible to stay in it longer than a few minutes.

It would have served Alpamere well to close this to fix the temperature rather than have life guards for it when there wasn’t really anyone brave enough to stay in there!

The play area is perfect for the younger children, with a little slide, and lots of fun activities for them to have a go at. From buckets to wheels and lots of the usual splash park activities.

There is also a bucket that fills from time to time to splash anyone underneath it – a perfect bit of fun for the old and young alike.

There were plenty of adults “walking in an orderly fashion” (!) towards it as the klaxon went off there… 😉

The wave pool runs every 30mins on the hour and the half hour, and again, is more than suitable for the younger visitors to the centre. The waves are a little more tame for those that are more accomplished swimmers though.

Verdict from the kids…

“Can we come again tomorrow?”

This was a big hit with the kids, and overall it was with us too; fun, clean, and efficient. The automatic wrist band, giving you 4 hours within the centre, and an extra 30mins if you spend more than £5 within the restaurant, is an excellent way of managing the numbers in the centre during peak times.

The lockers are opened with the wrist bands as well, so they are truly multi-purpose. 😉

The slides provide a suitable variety for kids. But it IS worth nothing that for younger kids, there is only the play area and the wave pool, as long as they are competent enough swimmers.

The queues ARE likely to be long within peak times, and therefore the four hours will perhaps be eaten into pretty fast, which is why we have marked this attraction down a little; alongside the fact that the second tropical pool was too cold to enter . We realise that we were lucky that three hours was more than enough time for us as the queues were non existent.

In addition, the cost is quite a lot for the time you do have available; £66 for a family ticket makes it out of price range for some. It would certainly be a treat visit on a family holiday. But it’s unlikely to be somewhere that people could return to regularly within a week’s holiday in the region.

Do check out the other Scarborough articles we have on the site, alongside out travel section. Come and sign up to us too.

Hope to see you again soon.

I've never been to a water park and this one seems to be very interesting. Not to mention that the price and location suits me very well:)

My kids love water parks! This one looks like a ton of fun!

This place looks FUN and ideal for family vacations. Thanks so much for this review.

The black run sounds so interesting! I love going to water parks with my nephews and they always enjoy the slides.

What a fun and fantastic place! Great for a family day out. The wave pool looks great. We have a few waterparks here in Orlando similar.