Over the last few weeks, we have been reviewing some of the new range of Star Wars Last Jedi Toys from Hasbro, including: 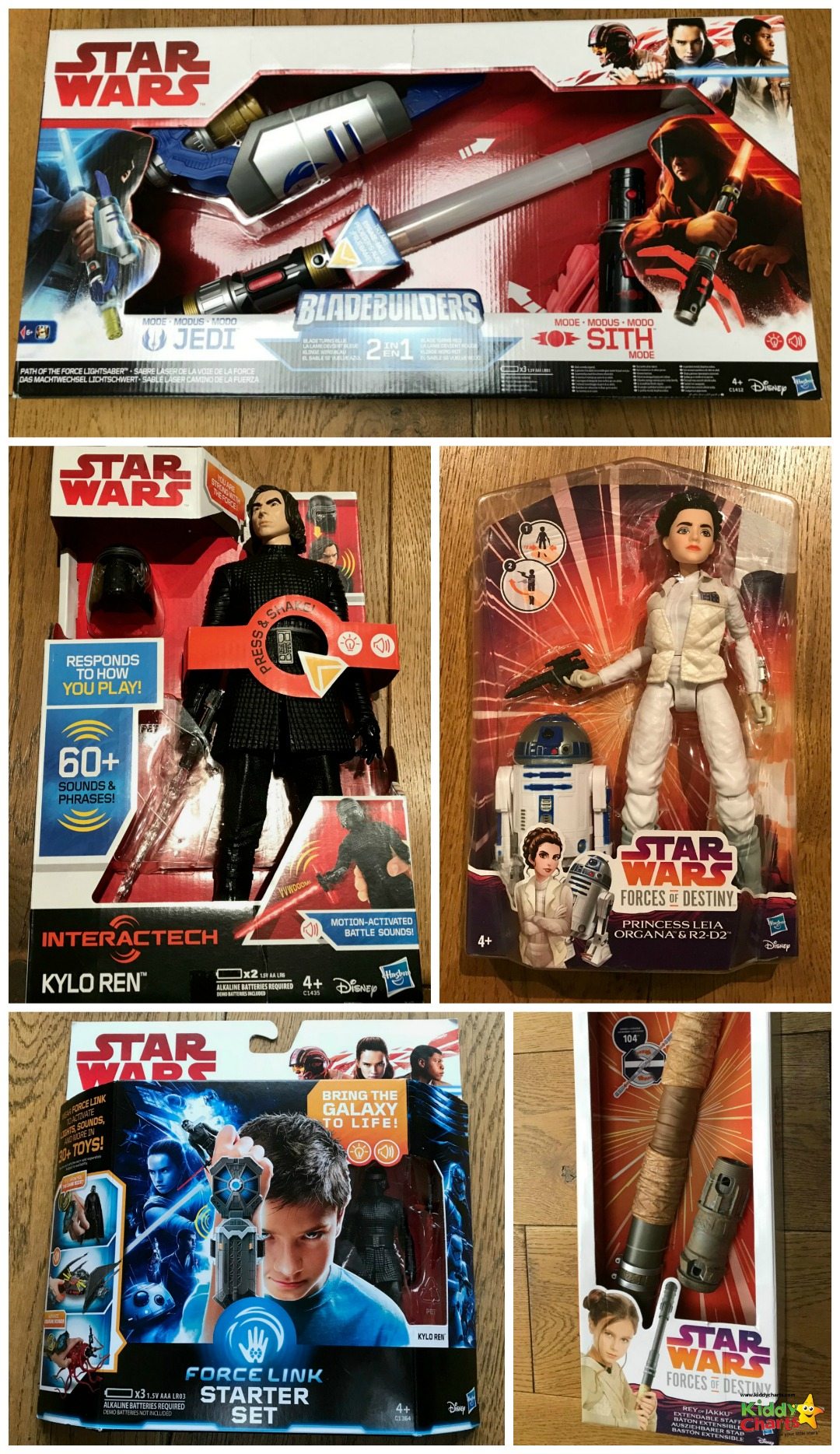 We have also been mysteriously infiltrated by the truely bizarre Mr. Chicken – and it has taken all the powers of the force to keep him at bay! Even Kylo Ren seems a little confused about it all… 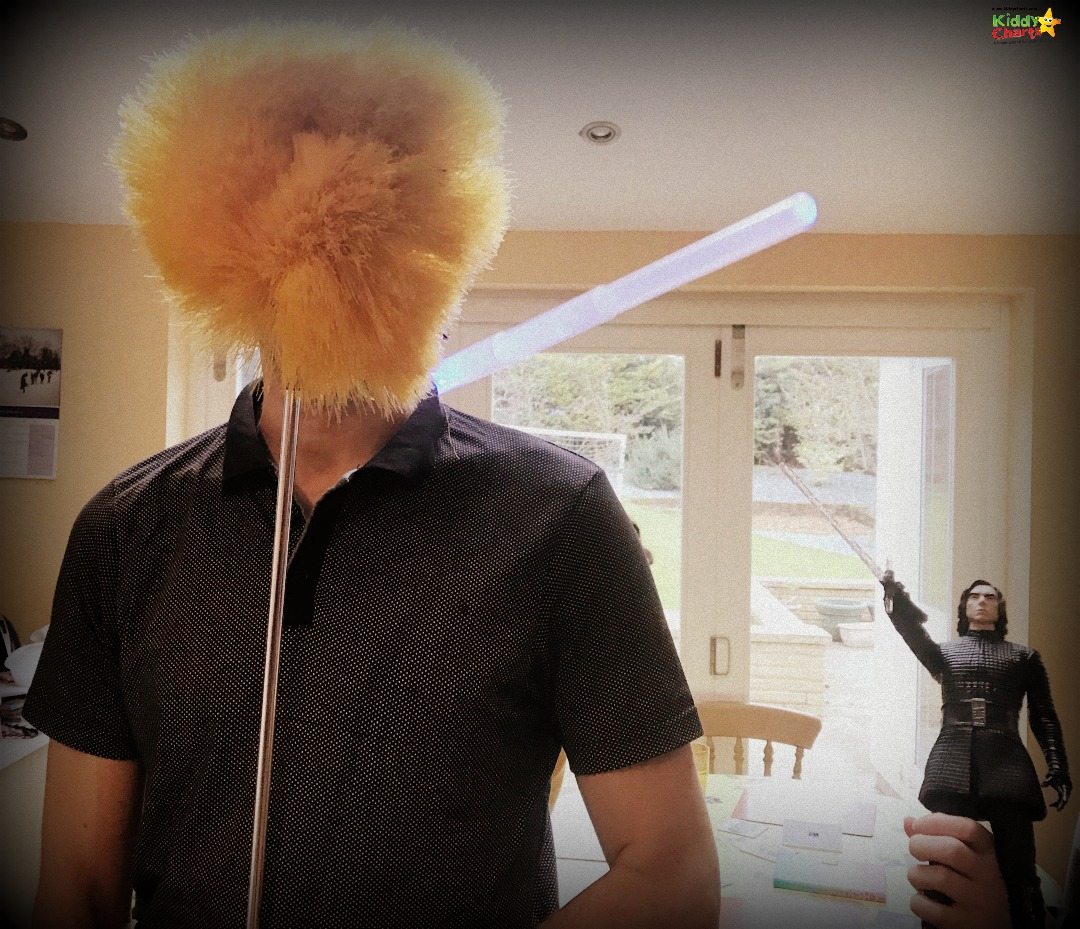 What are the new Star Wars Last Jedi Toys?

Before we go into detail on what we thought of the toys that we have been trying out, let’s give you all a little overview of them.

This is a modal lightsaber which comes with a number of different attachments, and a very clever little switch allowing you to be both a good and an evil Jedi. To give the lightsaber an even more authentic look, there is a connector for both the Sith, and the Light side of the force, so the kids always look the part.

Not sure the adults do though…particularly after a vicious attack from a new adversary – Mr. Mop! 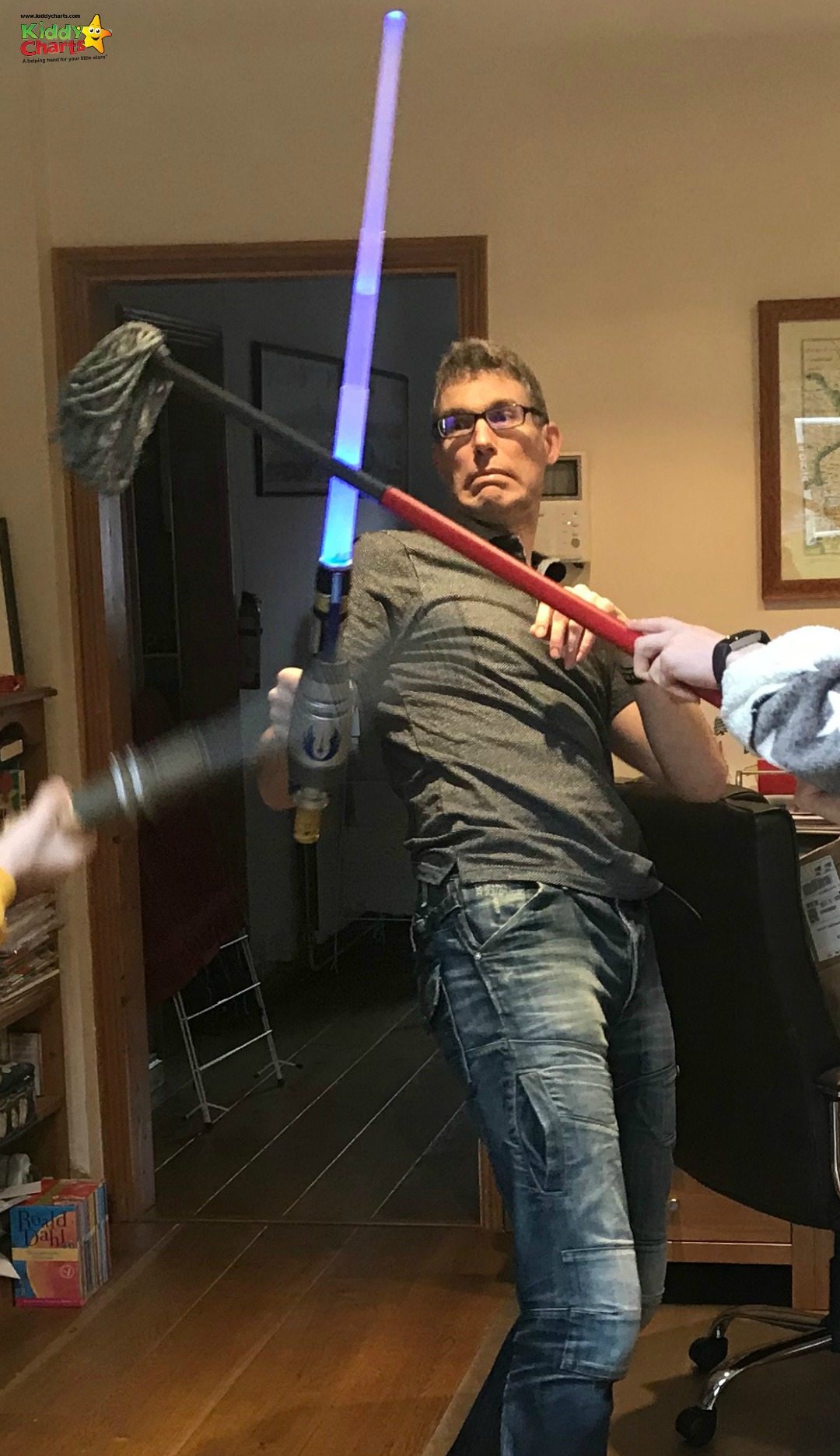 Rey’s staff is a very distinctive feature of the new Star Wars films, and now your kids can handle one; perhaps imagining how they might use it to defend the Jakku traders. Give the staff a spin, and it extends to a rather long 3.5 feet / 104 cm – so watch out for the light fittings in your house! 😉 The staff also attaches to the Bladebuilders lightsaber, for a bit of added excitement. Make sure that your kids don’t knock off too much when they have them both together though. It is pretty impressive!

The Power of the Force does take you to the strangest places you know…! 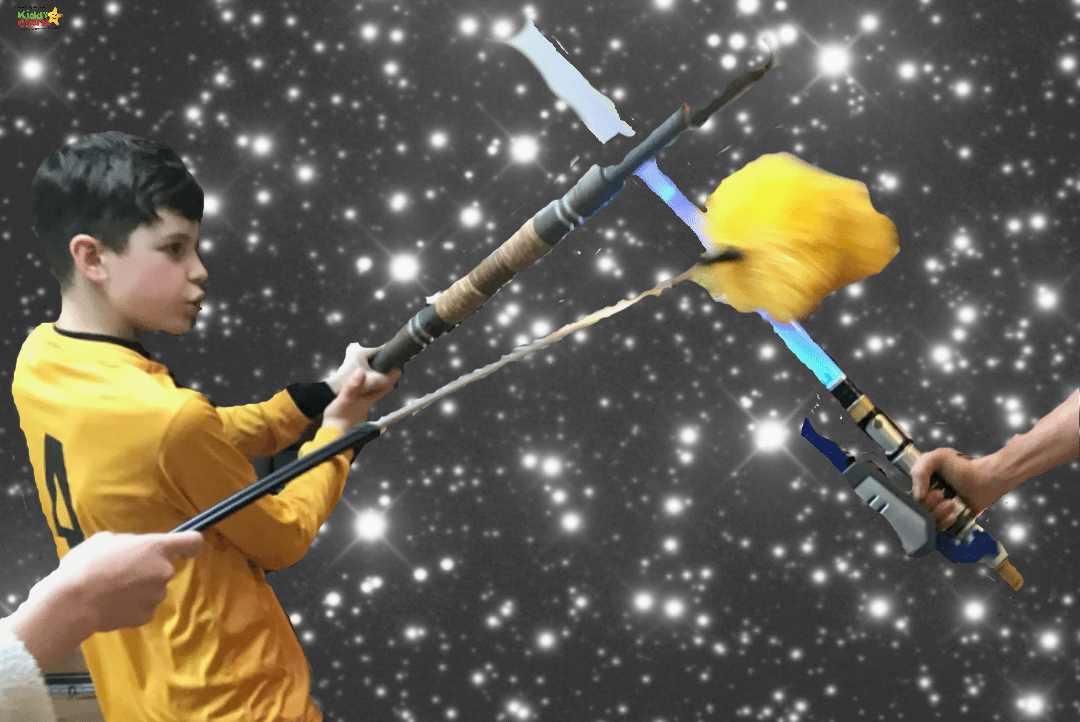 This 12 inch figure has 60 different sounds and phrases, which all sound remarkably  like the indomitable Kylo Ren; add his helmet and there are a range of different effects too. The motion sensors within the toy pick up the play activity, and respond. THE best bit about the toy is obviously the lightsaber that comes with him! Sounds are activated when you press the button on the figure’s chest. (AA Alkaline batteries are needed, and demo batterie included) 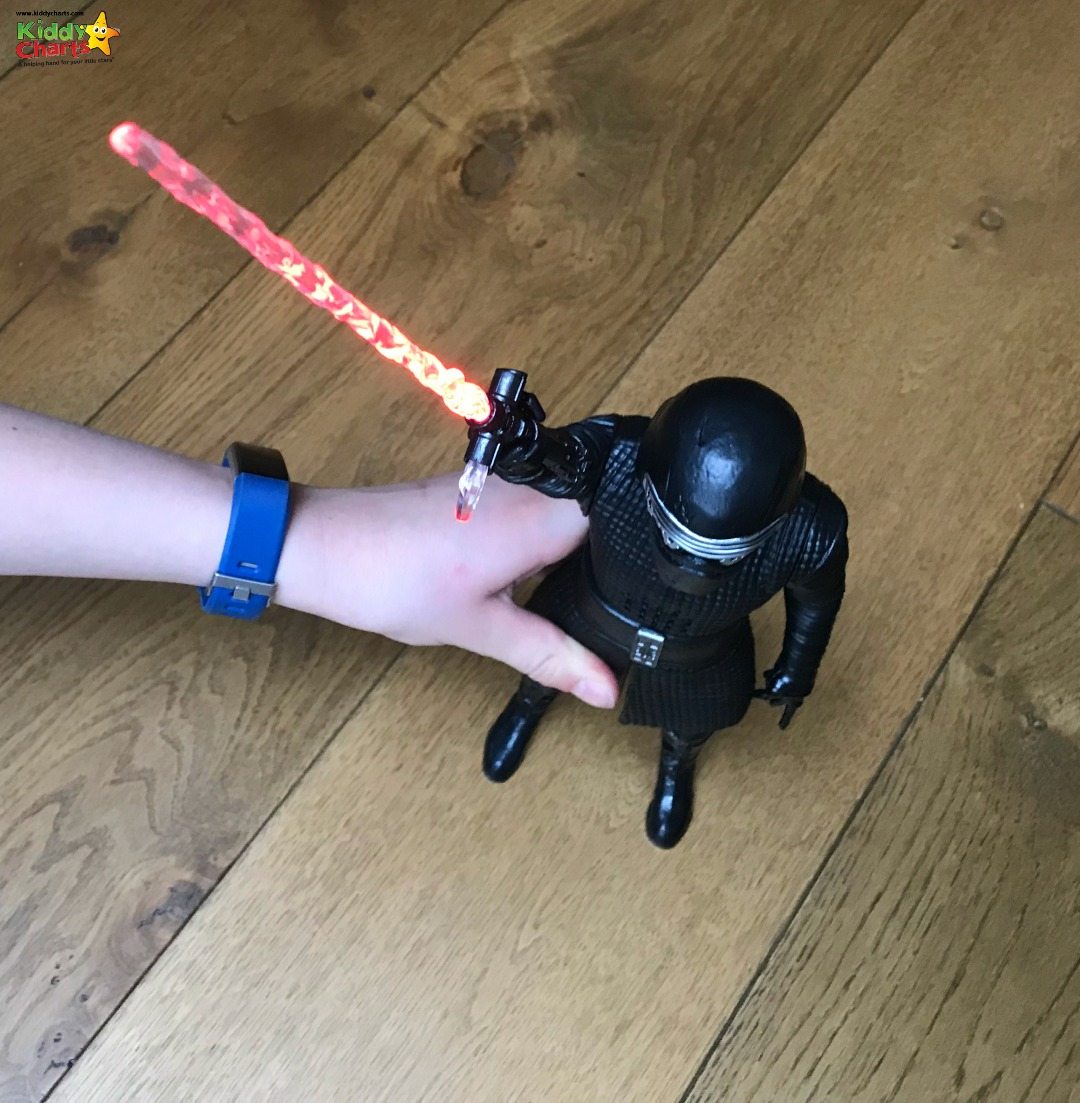 The Last Jedi toy range still includes some of our favourite characters from the original Star Wars trilogy and pay homage to it within the Forces of Destiny figure range. We were given the Princess Leia and R2-D2 set to test out. The figures are highly posable (Yoga anyone?), and this one comes with a removable blaster, vest and pair of boots. She also stands pretty tall at 11 inches high. We LOVE that this series of figures don’t need a battery too 😍 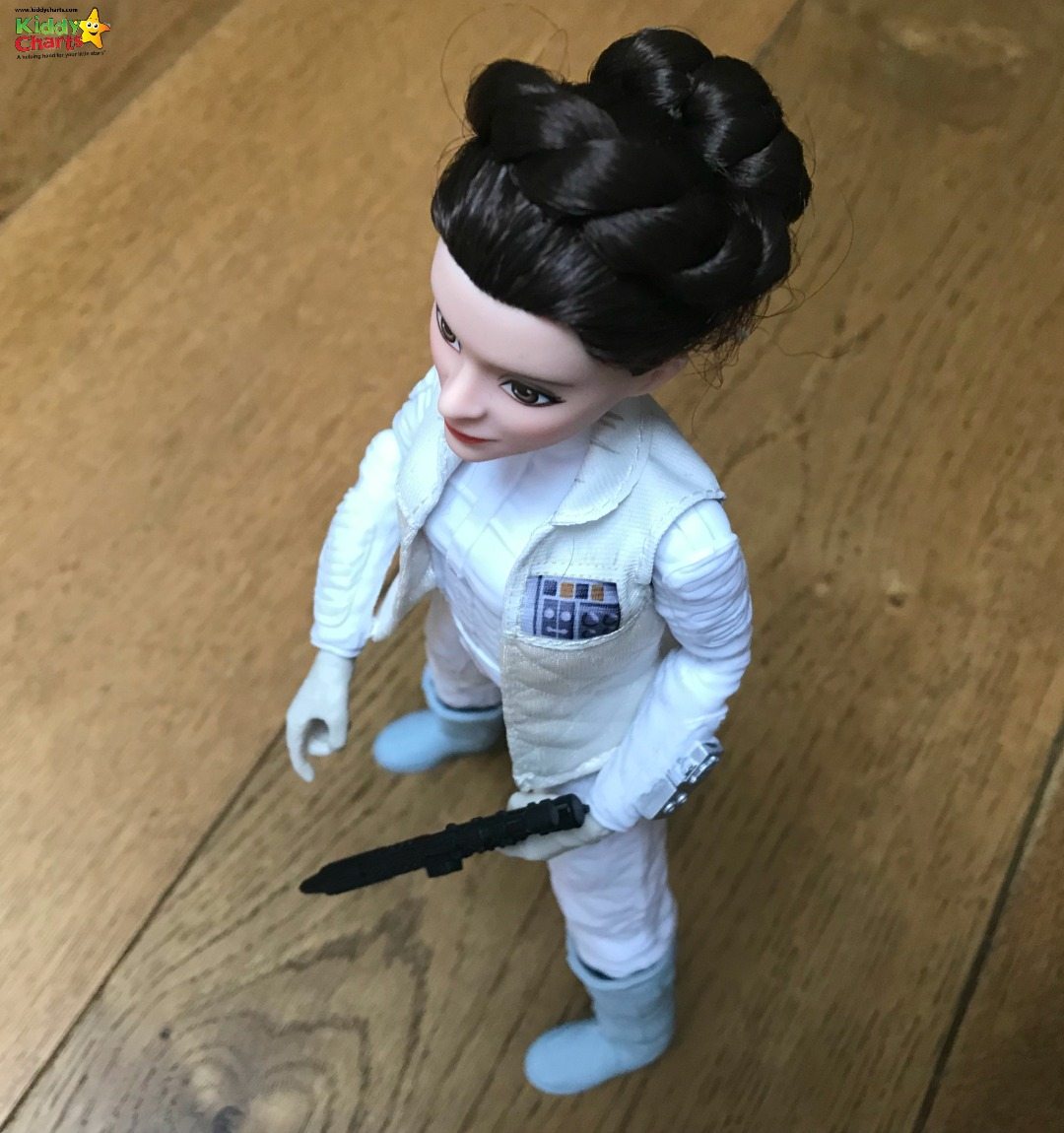 Force Link is the new wearable technology from the Star Wars toy range at Hasbro. Your kids wear the wrist band within the set, while playing with the toys, to activate sounds, lights, and phrases within the handset. The  Force Link range works with over 30 figures, vehicles, accessories, and other playsets. The starter set comes with a 3.75in Kylo Ren, so your kids can really get stuck into playing with the dark side of The Force. 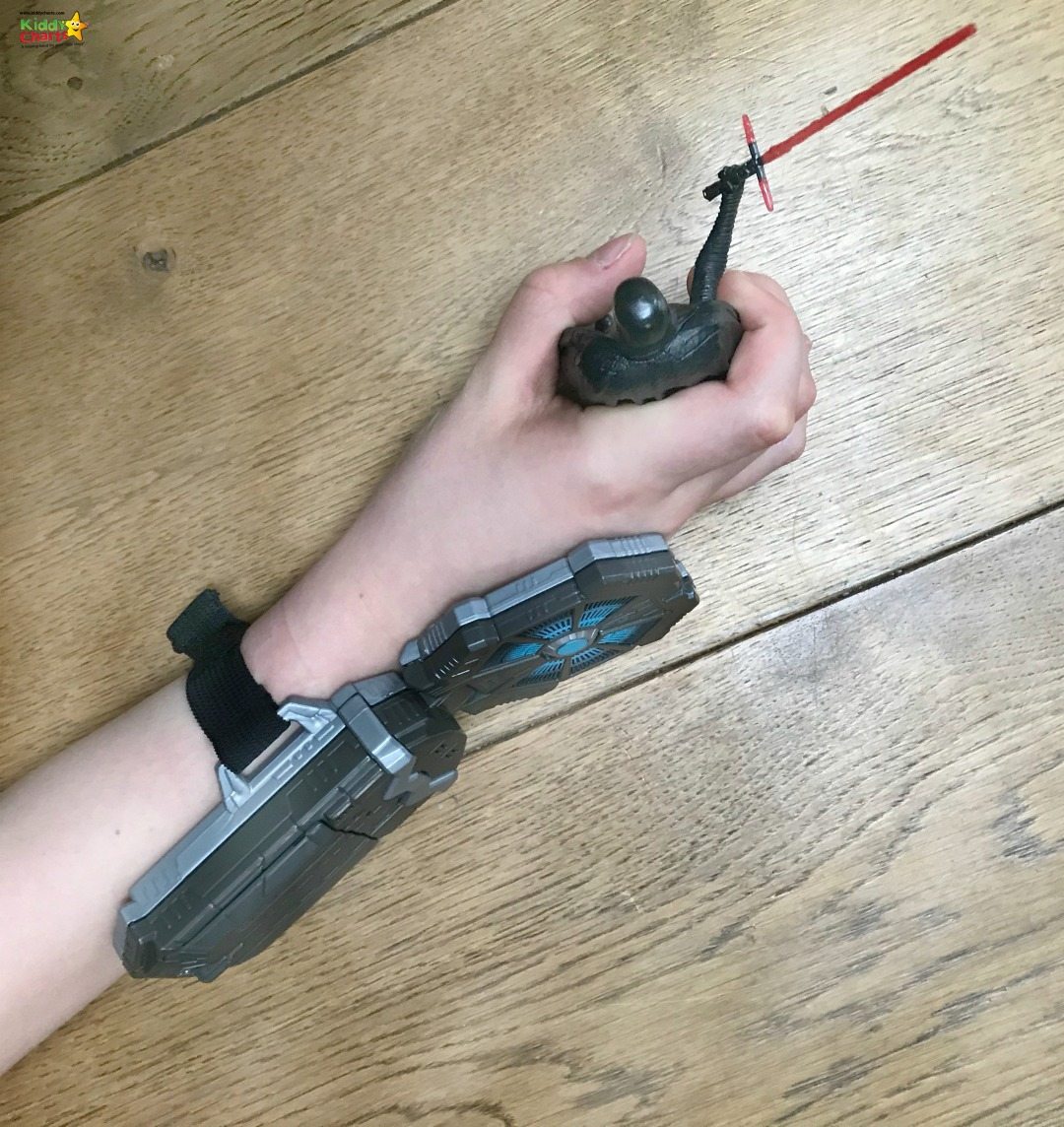 What did we think of the Star Wars Last Jedi Toys range?

This range of toys seems to have everything covered for the Star Ways fan; from being able to battle the dark forces with your lightsaber, to taking on the power of a Sith Lord. There is an emphasis on interactivity with the new range, and play value; with all the toys designed to immerse your children in the story, and re-enact key scenes in the films, or, as in the case of our kids, just make it up as you go along; Enter Mr. Chicken! 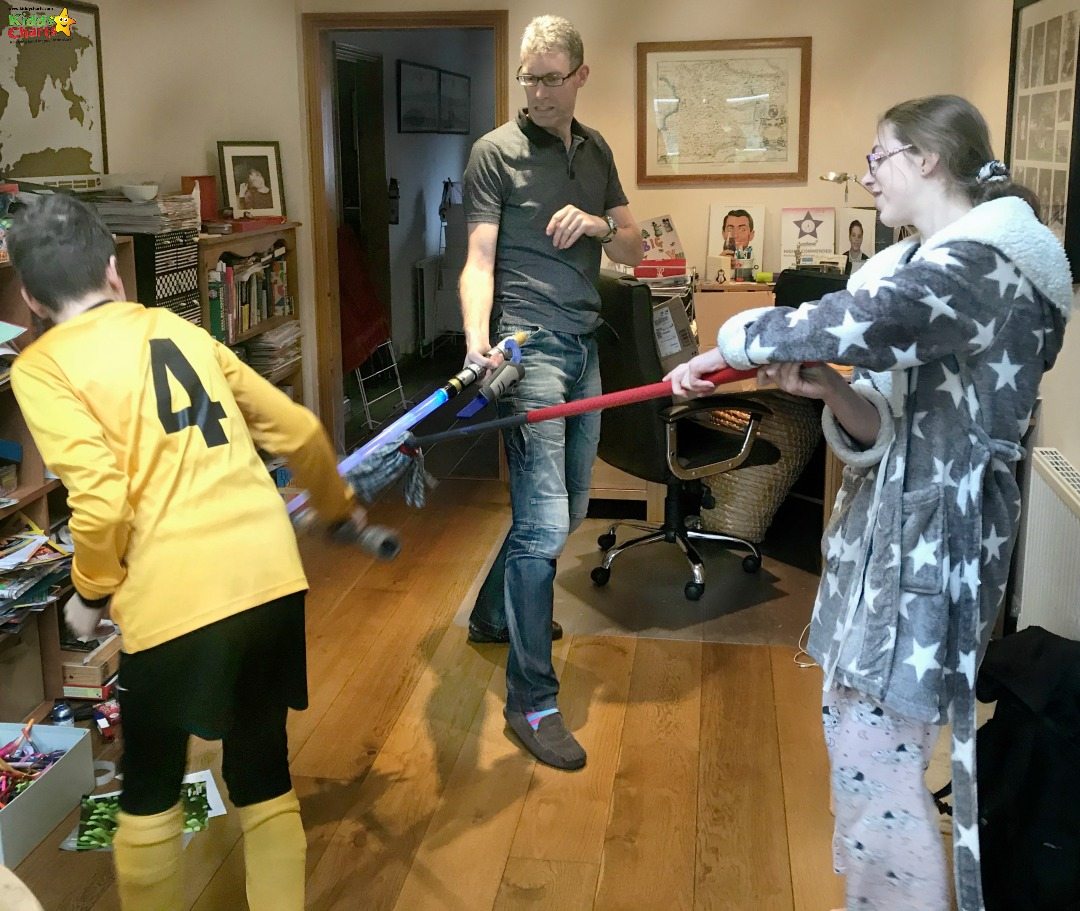 What can you do but get out the lightsabers and staff when your home is threatened by a man wielding a feather duster?!?

We are particularly fond of the Princess Leia figure, whose bendy body would leave any Yoga instructor jealous! 😉 🧘‍♀️Sometimes she really did have to keep an eye on that sneaky Kylo Ren though….

The lightsabers in this range are stunning, and have really given the kids a toy that they are actually willing to play together with; defending the house from the wily Mr. Chicken and his mysterious forces. Of course, your kids might want to take the slightly more conventional route of using the Bladebuilders lightsaber and Rey of Jakku staff to battle Sith vs the light side of The Force! 😜 The staff is actually rather good value for money at just over £21.99, but you will have to spend a little bit more to battle as a Sith Lord. Probably because the training can be so very expensive…

The Kylo Ren Electronic Figure is just under £40, and seems pretty robust, with some really fun interactive features, if you can put up with the noise. Do be careful with the lightsaber; somehow we have already lost the sword attachments on one side of it, so these are probably a little too lose for the kind of Sith shenanigans that he has been getting up to with Leia 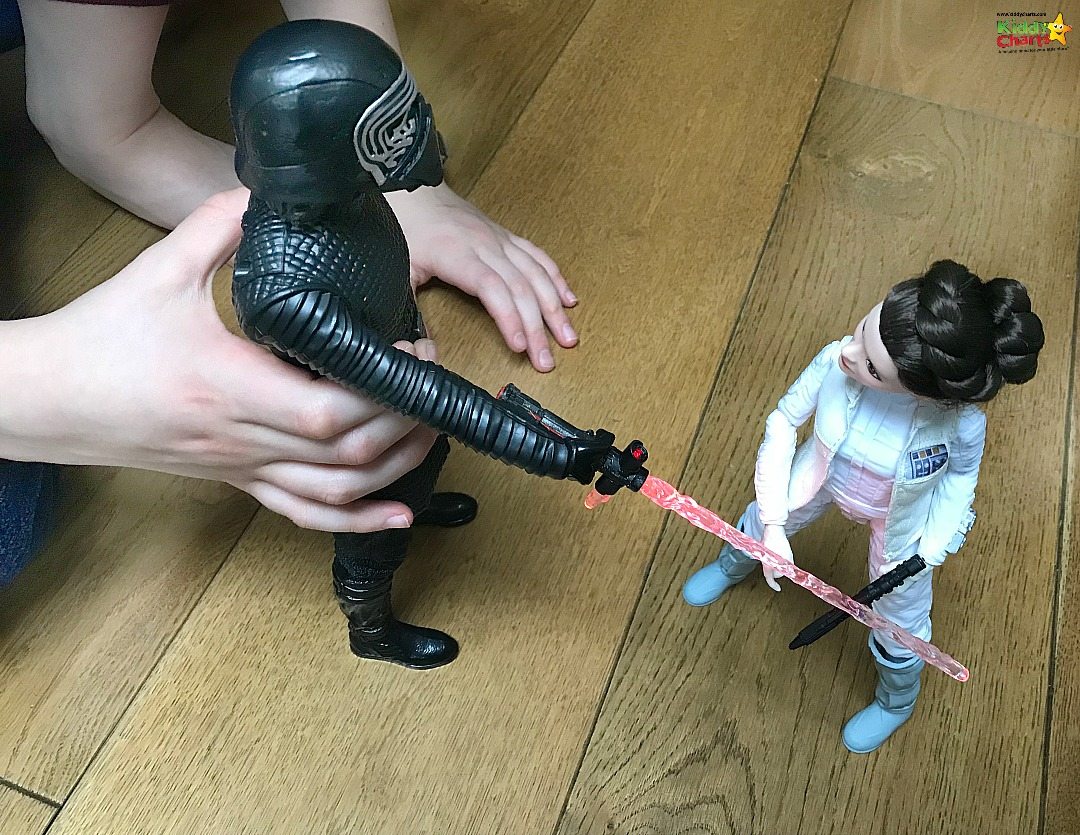 The sounds, and lights from the figure are rather cool though, and my Star Wars fan loves to press them and attack, usually when Mr. Chicken and his dark forces least expect it.

The Force Link wearable technology is a great idea for the kids, and clearly is in its earlier stages of development, as we really haven’t seen anything like this before on the range. It is a very interesting idea, but we did struggle to get into it; particularly because the bracelet is quite large compared to the figure that comes with the starter set. I imagine though, that adding other Force Link characters, particularly some of the vehicles, would enhance the gameplay, so we are reserving judgement until we have explored the range a little bit more. There are over 30 different toys, and playsets that can be used with the technology, so there is likely something for everyone. The Darth Vader and droid Force Link set look rather interesting, for example. Though I may have to pass on the BB8 mega playset, which retails at over £170.00; though I can imagine that some of the older Star Wars fans might find this set rather compelling. Who wouldn’t want their own BB8?!?

Wearable technology is still in its relatively early days, and toys are being developed and refined all the time, so we will be watching this Star Wars space. It is a great thought, and we’d love to see how it is received by others too. 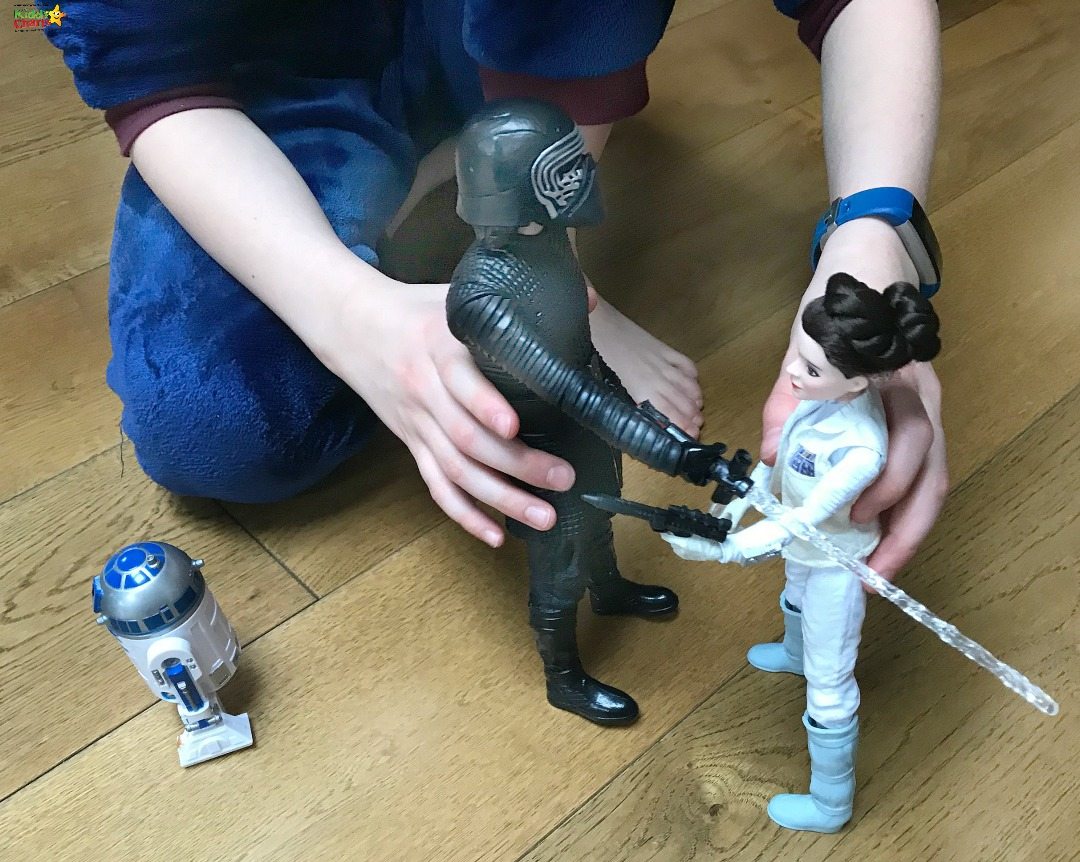 This range of Star Wars Last Jedi toys is a must for any Star Wars fan; that almost goes without saying. The Lightsabers (8/10), and staff (8/10) mean your kids can imagine they are the heroes and villains in one of the most popular franchises on the planet. We suspect that this is why they are perhaps a little more expensive than your bank balance might like. The Forces of Destiny figures (9/10) are an excellent way of building up your Star Wars collection without forking out a fortune in batteries, but if you are looking for something a little bit special as a gift, then the Kylo Ren Electronic Figure (8/10) s a good alternative. Force Link (6/10) is a cool concept, and we wait to see how it will develop in the coming months.

I am not sure everyone survived the onslaught involved in this review to be honest….. 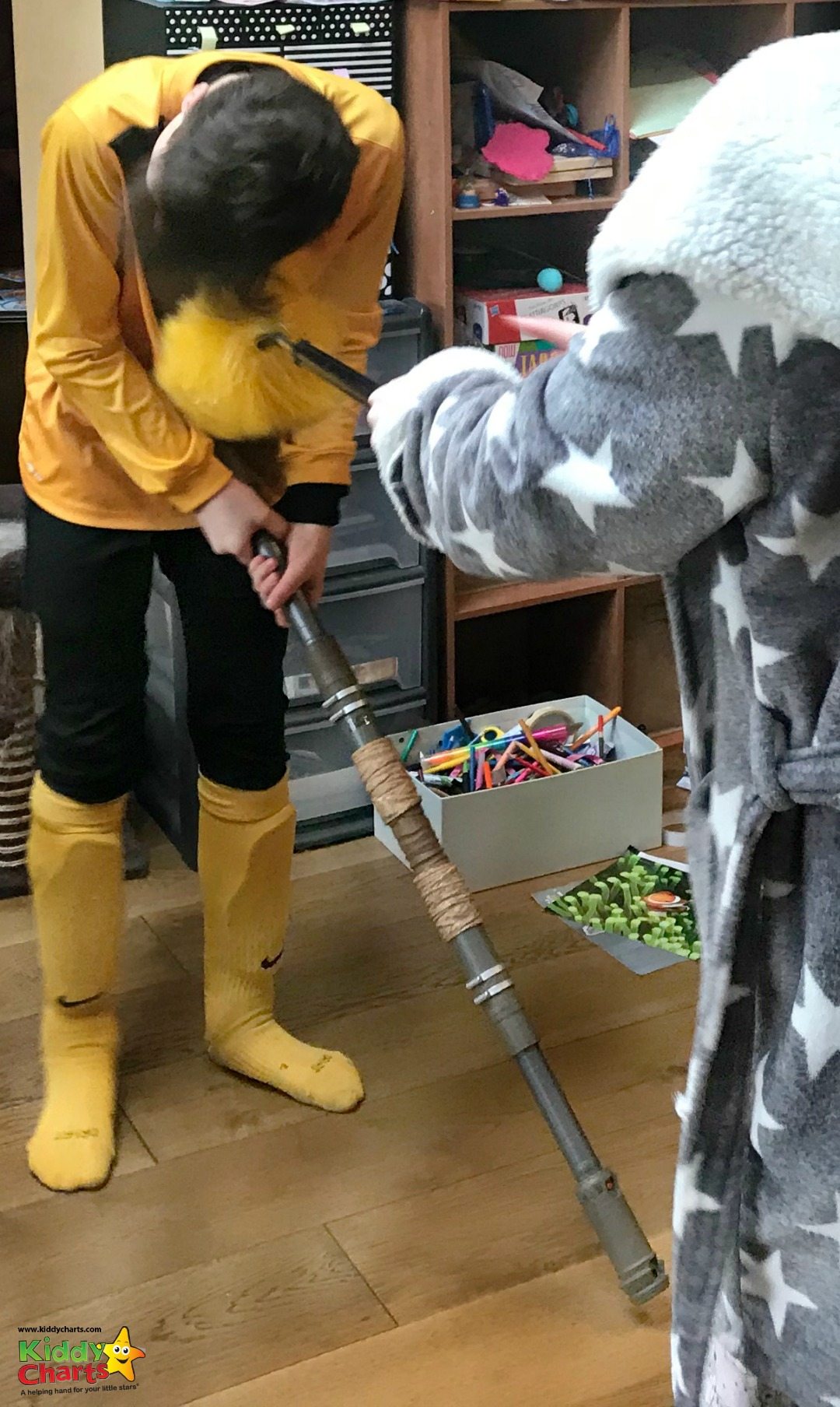 Even those strongest in The Force cannot withstand the power of The Tickle from Mr. Chicken it would seem?!!?

We have been sent these products for feature in this review, and all opinions are our own. No chickens (or feather dusters) were harmed in the making of this set of silly photos. This article contains affiliate links.