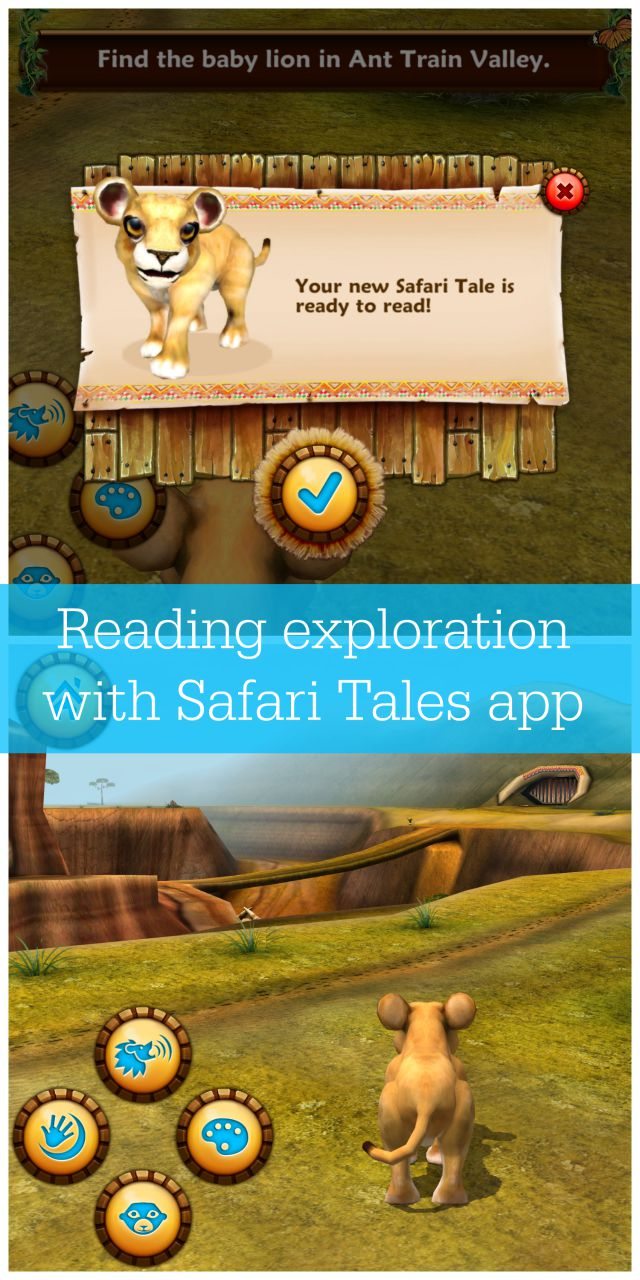 We were lucky enough to have reviewed the Dino Tales App that Kuato Studios produced before their latest release, which is on a similar theme. We have now been given access to their new Safari Tales app, which is available on Google, iOS and Kindle as well, all retailing at £2.99 My kids loved that you can even get a free Safari Tales colouring book around the characters too!

What is the Safari Tales App?

This is a continuation of the app series that is designed to encourage kids to read, by enabling them to build a book through gameplay within the app. The app is designed for children aged 4 – 10 years old.

Players have a specific task to complete, such as finding another animal, and after those tasks are done, they can read a book, either alone or with a carer, that tells the story of their adventure. Readers are able to change the adjectives within the stories created, with the idea of developing vocabulary, and imagination in the reader. 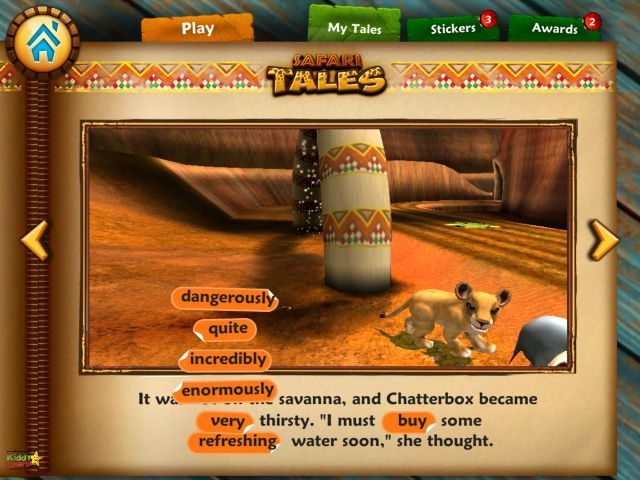 Gameplay enables kids to collect awards, and stickers along the way, as well as ask their guide, in this case a Meerkat called Darwin, simple questions about the setting, and the animals included within the story. For the younger readers, this provides an additional educational aspect to the game, alongside the build up of vocabulary and reading skills.

The completion of each task also unlocks characters within the safari landscape, which readers can than choose to use to build their next adventure. There are a total of five to chose from. For example, you start the app with an elephant. In the first few books (or tasks), can find a lion cub, and a baby crocodile to play with for the future.

This is exactly the same idea as the Dino Tales application, which offers good continuity between the two systems, helping those who have played one to be familiar with the new settings.

What did we think of Safari Tales?

We loved Dino Tales here, and Safari Tales is a great addition to the Kuato stable. Safari Tales will undoubtedly be a success with kids and parents alike, due to the unique gameplay and the gorgeous graphics, which were, yet again, a big hit with my kids (and me).

The patented system of creating a book from kids game play is truly exceptional, and offers great potential to the company for future instalments. The old favourites, of changing your animals colour, and exploring the world the characters are based in, still enchant. There are a few additional mini games within the app, such as a gorgeous river-ride for the lion cub in the second Safari Tale within the Whirlpool story. The graphics for this are beautiful… 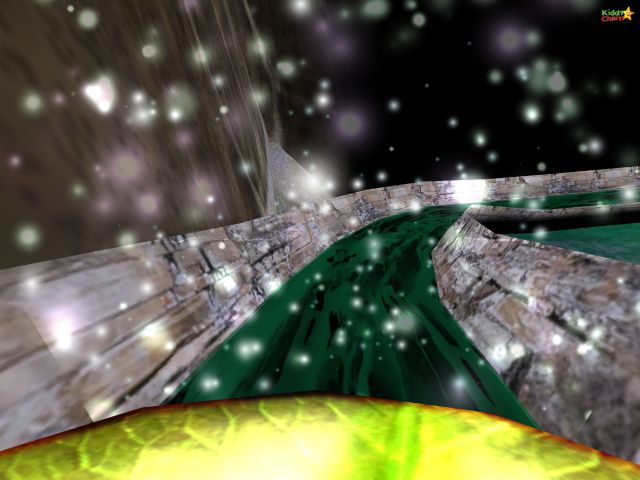 If the sparkly river-ride isn’t for you, the detail in the animals is stunning too.

It would have been good to see some of the additional features built on from Dino Tales focused on the more educational aspects of the game, not just the graphics and gameplay though. So for example, we would like to see the ability to interact more with the stories as a child gets older; perhaps even incorporating a way of parents measuring their child’s development within the literacy environment. This would enable more longevity within the game too. As often is the case with educational apps, there are only a finite numbers of times you can build your book, and it remains interesting to readers.

The kids did seem to get a little lost in the app from time to time too, partly because there was so much to see and do in there. Therefore, a map would have been good to help chart progress. This was available in Dino Tales, but seems to have disappeared. There are in game hints, and my kids did find these helpful… 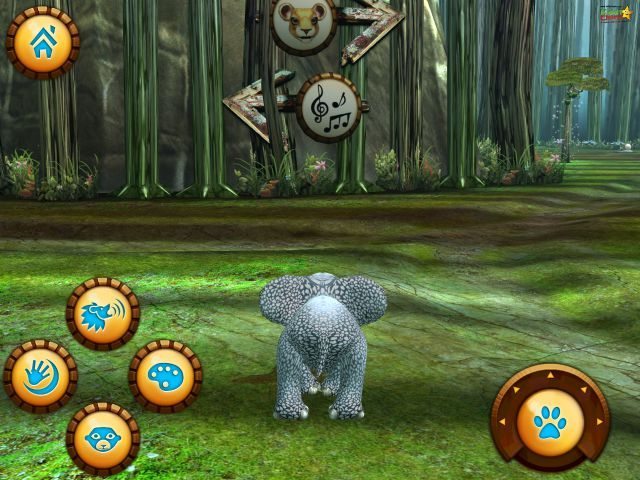 …Darwin does also provide useful in game help, though there does seem to be a little bug in that some hints aren’t relevant. For example, myself and a reviewer found that we were told to ask questions about stickers within the Word Wheel; the tool that allows you to ask Darwin questions. However, there doesn’t seem to be anyway to ask about stickers here…. 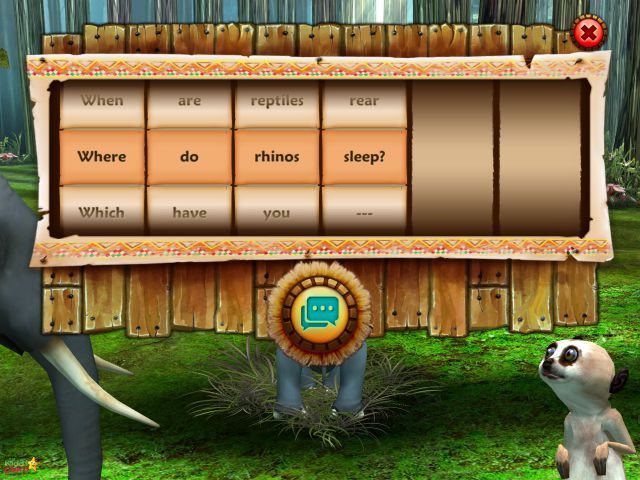 The parents corner is helpful for being able to understand the game, and setting time limited on gameplay with the kids, However both myself, and our reviewers, were disappointed that it was not possible to add further children here without deleting the profiles for the previous one, and presumably deleting their books too. It would be sensible in future additions to make sure that multiple profiles can be created within the game, so as not to disappoint the children after they have started creating their stories.

What did our reviewers think of Safari Tales?

There were mixed reviews of this App amongst the mums that tested it out, though all the children loved it – with marks from as high as 10/10 from a 6-year old girl to 6/10 from one of the mums. The main problem was the navigation system, which some of the children found hard to use. This has been changed from the Dino Tales version, which we also found difficult to manage. It is obviously not as easy thing to get right, probably because of the wide age range the app is aimed at. For example, some of the younger children found the touch system using the paw to be hard to control, though older children seemed to be able to use it a bit better. Adults didn’t seem to have a problem at all!

For all the families that took a look at this app. all the kids loved the graphics, and the idea of creating their own stories “on the go.” Even older children (above the top age range) were engaged by it and found the ideas fun. However, one parent did point out that the books are only offered up at the end, and it is easy, without supervision, for your child just to treat the game as just another adventure. It is worth supervising gameplay to get the best out of the educational part of this app; from the questions that can be posed through Darwin, to the adjectival choices. There is nothing stopping a canny kid from just accepting what is provided and moving on ;-)

This is another good game from Kuato, and we are sure it will please many a small pair of hands in the coming months. For bigger hands, I mean the parents here, we would like to see more additional educational value from the games; lets take it to the next level. I know, I am a hard task master ;-)

The idea of creating a book from gameplay is brilliant, but with the third and fourth in the series, could we perhaps go even further, and really bring out the educational genius in the app developers at Kuato?

Perhaps Ocean Tales (I made that up by the way…), can have a talking dolphin guide and you can develop more story lines yourselves, or have the ability to check your baby dolphin’s reading progress? The parent corner offers strong instructions for gameplay; but we would like to see more education options here too.

The addition of a length of game limiter is a great idea though, and helps to insure that kids are not on the game for too long, and also don’t get too bored with the environment either.

Overall, we would recommend the app, and think that £2.99 is good value for money. The app is designed for your kids to play WITH you though, so do supervise them to get the best out of its gameplay and educational aspects. This isn’t a negative by any means though, there are enough apps available to just entertain the kids without offering learning opportunities for parents, and their children. This one does both if you take the time to work through the stories with your child.

We were sponsored to carry out this review, but all opinions are our own and the reviewers concerned. We are always completely honest in our opinions.

This is a nice article. This is definitely useful. Informative article . Great Post! There is so much you have mentioned where so much can be learned. I like to share this with you

I like that the app addresses a need for Kenyan content for children, you know, scenarios, stories that have been told in school and that are Kenyan for Kenyan kids.