There was chaos in the little star household this week, as we received a game from Drumond Park which made little Stuntboy even more mad than usual…. 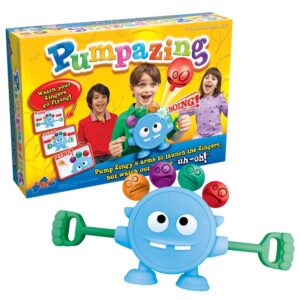 Its a simple game; you pump the arms of Zingy after placing the four coloured Zingy heads into his body. They fly out. If he says “Uh-oh” when they shoot off, you lose a Zingy card. If you lose all your cards you are out of the game. But if he says “zing” or “boing”, you are safe, and live to fight another day! You can then just pass him to the next person in the game. Then they can start pumping too! It’s for ages 4+ and 2 or more people can play.

Its dead easy to start the game. You need three triple A batteries, and a bit of “umpf” to get the heads into Zingy’s body, and to pump his arms. You need to remember to deal out all the cards, but then you are ready to go. Anything that’s that quick to organise in this house, is on to a winner! It was very simple to learn, so they were both ready to go with the game in about five minutes. Another plus for busy mums.

This is given as 4+ and above. Due to the strength required to pump Zingy’s arms, I think this is about right. This does mean that its good for improving motor skill development, both fine and gross. So bear that in mind when considering purchase. However, for older children (7+), the interest in the toy is likely to wane.

Yes they most definitely did. They seemed to love it. Stuntboy was particularly fond of rushing off to collect the zingy heads when they shot out. He was also a bit TOO fond of trying to point them at things that he shouldn’t so they shot off in a direction that they weren’t supposed to…like at the cat, his sister, or the French window! So make sure that you are sitting a good distance from either other, and the pets are out of the way….

The ease with which kids can grasp the idea of the game means that its a good toy to have around when you have visitors, or even at a party. Though do be prepared for Zinger head chaos!

In fact, my kids rather liked the zinger heads and Zinger, as you can see…. 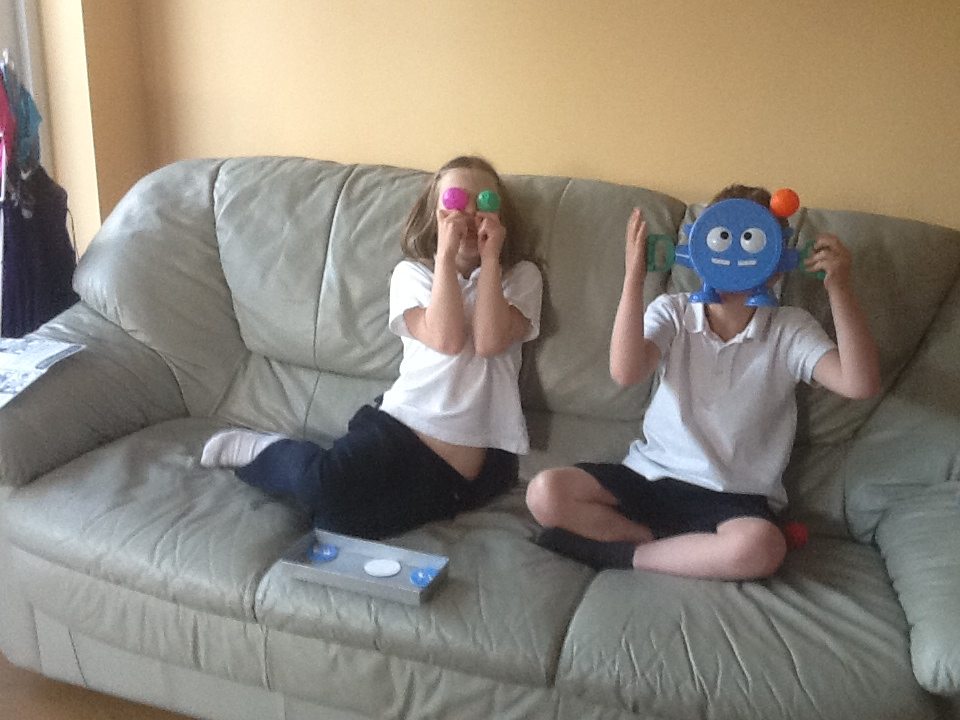 Pumpazing Review: messing about with the toy…

Yes and No!  We loved that it was so easy to set up, and get started, We were also pleased that we could leave them to it while we did the washing up. Anything that helps us out there is great.

However, there were a few minuses. I think that this is probably one of those games the kids will love for a short time, but might tire of; depending on the attention span of your children. My eldest is seven, so overall, fun for the kids, but it may be short-lived.

In addition, there is no skill to the game, so its really all about having a bit of loud fun with the children. Not something that’s overall a problem, but don’t buy the game for its educational value!

9/10 for fun and loudness, which is what my kids gave it

6/10 for staying power and educational value from me :-)

The game was provided for the purpose of review, all opinions are mine and the kids own. The Photo of Zingy is copyright owned Drumond Park, and the picture of my kids is all mine, naturally.