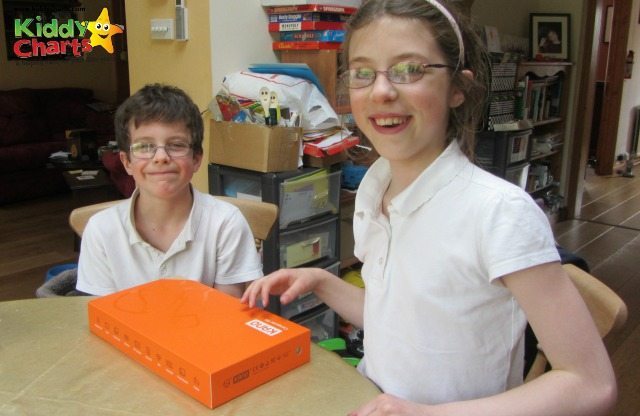 We were given the opportunity to take a look at a rather sexy version of the Raspberry Pi – the Kano Computer a few weeks ago. I couldn’t resist it because it seemed to me a little like the “Apple” of the Raspberry Pi world…it looked sleek and cool. I am a Apple fanatic, and therefore it was impossible for me to resist…

What is the Kano computer all about?

Kano have created what they hope is a computer that kids can set up themselves, with little assistance from adults. You can purchase one here. The computer comes with a couple of books, the first of which explains how to build the computer using pictures, and simple words so that even the kids can put it together. The box contains:

You need to find a screen, and your TV will do as we discovered when we set it up. It is so simple; just to plug it in and away you go. 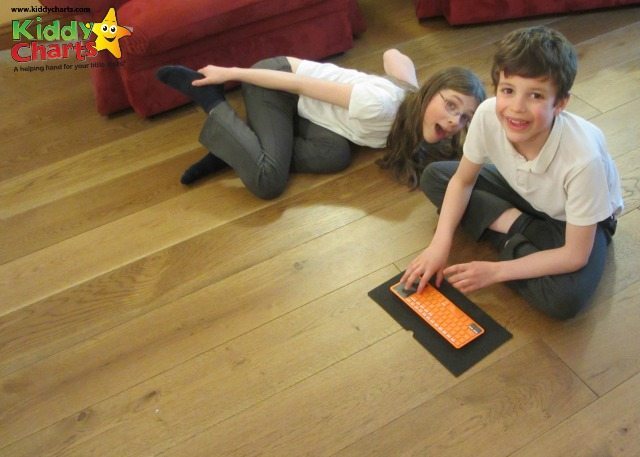 Once the Kano is up and running, there are a number of different types of coding environments and apps that you can choose from, some of which teach “real” coding, such as the painting program, and others allow your child to use block elements to create a program, such as Pong. Kano World is the central hub that anyone with a Kano has access to enabling them to communicate and follow other Kano users, submit their games, and also get new apps for their computer. Brilliantly, all the apps are free, so once you have made the initial £119.99 investment, you are off.

Clearly security is important in an environment that has been created with kids at its centre, so registration must be done through an email address from a parent, and permissions given through here.

The keyboard allows children to type in their code, and create their games as per on screen instructions. The grey area to the right of the keyboard is a touch pad which helps you move the Kano mouse around the screen. Each task within an app gives them a reward, through which they build up points and level up in Kano World. All kids love a good reward right? ;-)

What did we think of the Kano computer?

We decided the best way to show whether it was easy to set up was to video us doing it! Forgive my wobbly video-ing, but we think this is a rather helpful piece of film showing you:

We decided to include our little error on the screen front…and even with this, you can achieve set up in around 20 minutes out of the box first time…..

As you can see, we managed it!

The idea for the Kano computer is an excellent one; making the Raspberry Pi more accessible to kids, and to allow those adults without a geek bone in their body to help their kids to discover the world of coding.

The operating system (OS) that Kano have created enables your child to explore coding in a way that suits them; clearly an important factor when designing both the product, and its operating environment. The apps within the OS, such as Pong, and the drawing app, give the children a good start in understanding coding. Pong offers an introduction by using blocks to build the code, whereas the drawing app helps the kids get stuck in with actually writing the code itself.

My daughter is nine and was really keen to understand the coding itself. Younger children will benefit a lot from using the blocks. She was able to draw a smiley face, much to her excitement, after less than 20 minutes playing with the computer.

The “spellbook” is a clear, and concise guide to how computers “think”. My nine and seven year olds were straight in, no messing. They spent a good deal of time playing with the computer on its first outing, and have come back a number of times since. The added bonus is that as this screen time is also for learning there are fewer arguments in our house. We have even relaxed our computer day rules so they are able to have a go on the Kano outside usual screen time hours. 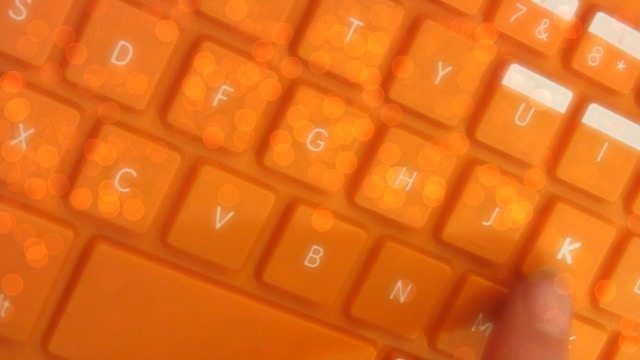 We loved playing with the Kano, and were particularly impressed with the ease of set up. The instructions that come with it are clear, and the coding “spellbook” provides kids with a great way to unlock the “mysteries” of coding. We all know how important coding is now in the UK, as schools introduce it to our kids at younger ages. Our only criticism is the responsiveness of the controls, particularly the touch pad, which could feel slow sometimes. However, I suspect that this is  because we are used to the rather super-dooper power of the Apple Mac.

In summary, the kano computer provides a good way to introduce children to coding. There are cheaper options available to buy a Raspberry Pi. However, those options aren’t for me, and I suspect many other parents who have no clue about the joys of code. The Kano is accessible and offers a sleek alternative to those other options for the Pi.

The £119.99 cost gives you some solid, great looking kit, and excellent support when you aren’t too sure what you are doing. The Kano community is another way of stretching your children too, as they explore the other games created by those within Kano World.

Do you have a Kano – what did you think of it? If you are looking for other Kano reviews, there are some other great ones from my fellow bloggers including:

We were sent a Kano for the purpose of review; all opinions are our own. This post contains affiliate links.

good information about kano computers.Nice video.These are good for kids.

Hi Nice information. Kano computer is new to me but after your article i got detail idea. Is Kano TAB available in market?