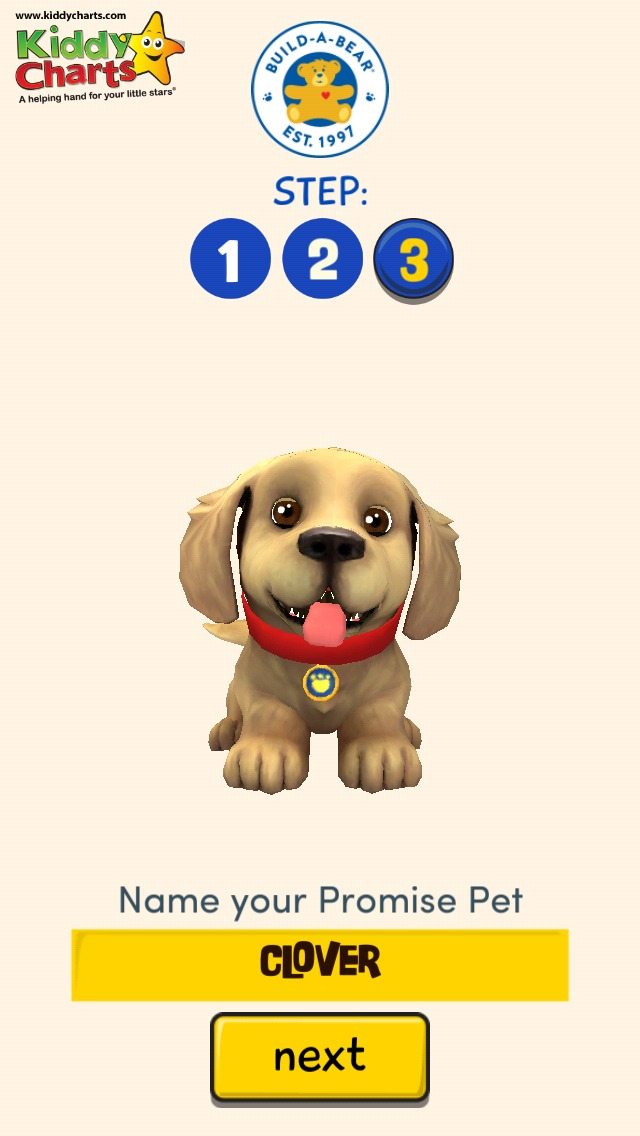 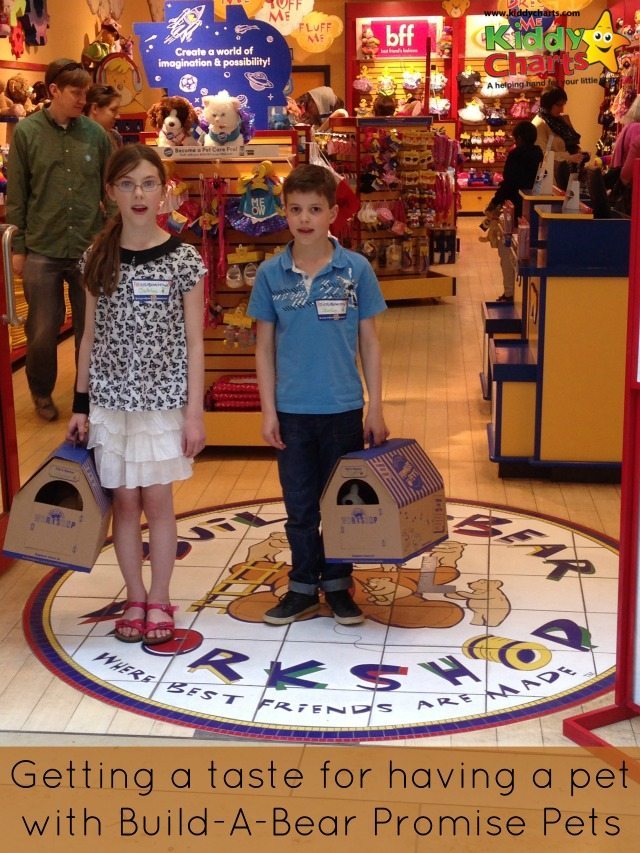 We have written about Build-A-Bear before; and ever since we did this review, we have had to go back a few times, for birthdays, for pocket money purchases, and for a wee nose around the Build-A-Bear that we have near us in Cambridge. We were lucky enough to be offered the chance to review their new range of toys, Promise Pets, which were released in May 2015. Guess what, Stuntboy and Chatterbox were more than keen to take a look!

What are Promise Pets from Build-A-Bear?

Promise Pets (£19.00 RRP) are a new range of soft toy characters at Build-A-Bear allowing your kids to choose their very own pet from a:

My kids decided on the golden labrador and the spaniel…. 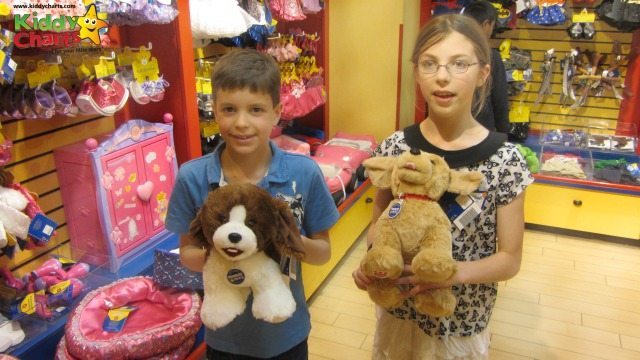 If you want to know how Build A Bear works generally, do take a look at our previous post. This post focuses purely on the Promise Pets range of toys.

Your Promise Pet has its own rage of clothing, and a mobile app that can be downloaded both from iTunes and Google Play. Once you have bought your pet, and got his all important birth certificate, you can use the app to look after him, just as you would a normal pet. Activities on the app include

You do, of course, need to register your Promise Pet with the app as soon as you start it up – but you’ve got all the details you need on the label he came with…she/he needs a good name to start with!

Every Promise Pet is given his own little “home” when you leave. You are given a free kennel or cat basket, which you can even put your pet’s name on.

What did we think of Build-A-Bear Promise Pets

Promise Pets are a very simple idea, but one that my kids were very excited about. A trip to Build-A-Bear is usually highly exciting for that time when you are building your little friend, but sometimes it all seems to be over rather fast. The ability to integrate the activity with an app you can use at home, appealed to them both.

“We get to look after them like a real dog, and they even have a kennel.” 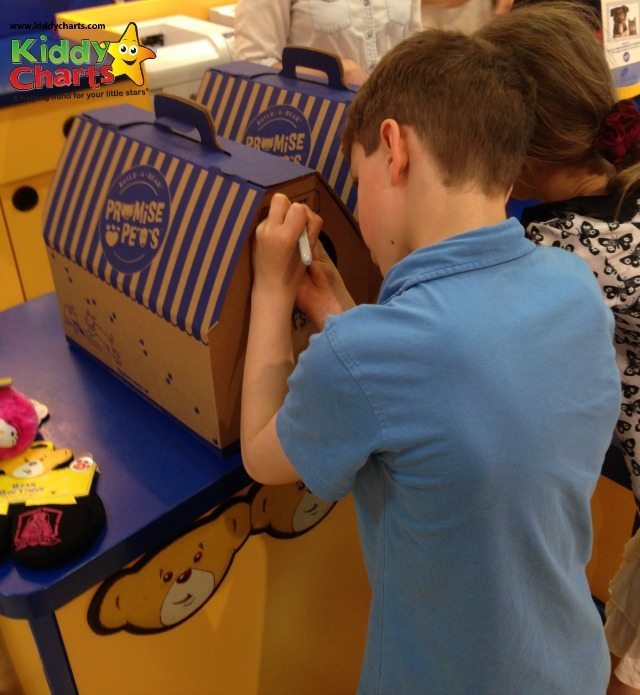 The range of accessories are good, and very specific to the animals that are available. My son a dog bowl (£6.50 RRP) – which he has already spent a good deal of time making sure his dog is “being good” and eating from regularly. My daughter wanted something more simple, so picked a scarf (£2.50) from the standard collection of clothes. 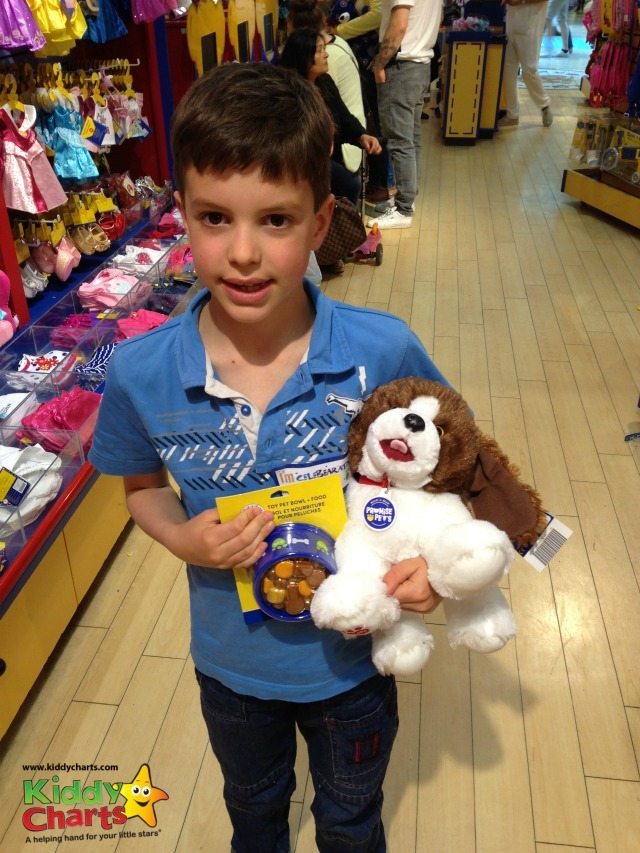 Our Promise Pet is now a regular cuddle companion at night for Stuntboy.

The Promise Pets app proved to be a little more problematic for us to get to work. I suspect that it isn’t compatible with some Apple models, as it simple wouldn’t open properly on our iPad, or my children’s older phones, which they have has hand-me-downs from mum and dad. However, we did manage to get it to work on the iPhone 5 that I have, so they used this in the end.

From the Apple store it says:

“Promise Pets requires iOS 7.1 or later. Compatible with iPhone, iPad, and iPod touch. This app is optimised for iPhone 5, iPhone 6, and iPhone 6 Plus.”

Do check your devices if you need to while you are in the shop if you can – as it is a free app, there is no harm in giving it a try beforehand!

Once we got it going, the kids did enjoy playing with it. There are some lovely interactive touches where you actually need to have your pet with you to help progress in the app, for example when you weigh or take your Promise Pet’s temperature.

My kids love Build-A-Bear; it is such a really wonderful idea, and everytime I go, I do so wish I had thought of it…just imagine that… ;-)

Promise Pets are a natural addition to the range, allowing parents to get their kids a pet, and to teach them a bit of responsibility, without the worry of actually having a real one. At £19.00 they are also at a relatively low price point compared to some of the other available characters, particularly those associated with a franchise. This makes them a good choice if you are trying to keep your Build-A-Bear trip costs down, which can mount up, particularly when you add accessories on to your costs.

The toys are a good stepping stone for getting a real animal, as some of the tasks on the app are helpful in providing a basic understand of the key aspects of looking after your own pet. In a simplified way, of course. There is no substitute for actually getting a pet, and REALLY having to look after a living, breathing creature that relies on you. No Promise Pet is going to teach you how guilty you will feel when you forget to feed or aerate your Aqua-dragons and they all die. *oops* Thanks goodness our cats are still alive. ;-)

We marked the app down because of the compatibility issues. Given that a lot of parents won’t upgrade tablets or phones regularly due to cost issues, it would have been good to see more testing for the app on some of the older Apple models.

Overall though, a cute idea for the kids; and a great way to keep the Build-A-Bear experience alive for a lot longer than the hour you spend in store!

Do note that those of you that go to Build-A-Bear stores before 31 May, 2015 can donate at the till or buy a satin heart for a £1 to give to the Build-A-Bear Workshop Foundation’s support of local organisations and charities that help both children and animals in need.

Disclosure: We were provided with the Build-A-Bear for free for this review, but we purchased the accessories ourselves. All opinions are our own.