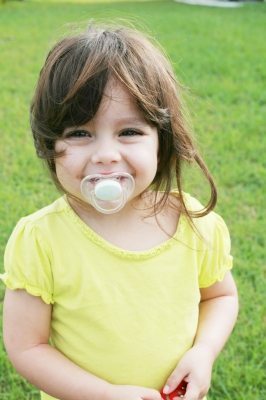 It can be hard to wean off a dummy: we offer some tips.

Many parents often worry at what age they should try to help their child wean off a dummy. Are you struggling? Well we are here to help. Firstly, try our sticker charts; we have a wean off a dummy behaviour all ready to go for you.

Secondly, listen to our lovely Agony Aunt, Maria Albertsen, as she gives us some advice around the topic.

Once a child reaches about 18 months old, parents often start to wonder how they will do this. Sometimes children just do it with ease and don’t even notice it’s gone and then there’s the children who scream the house down as if their life depended on having the dummy at all times!

It’s not unusual for a child to be children 3, 4 or even 5 years of age before a parent can successful get rid of their dummy!

If this is the case for you, then you are not alone, so many parents go through this, often hiding the dummy when they have visitors, not using it in pubic and not telling anyone about it as they are ashamed their child still has it!

So what is the problem with them having a dummy (or a pacifier as they call it stateside)?

Well, apart from the dodgy looks from the public when a child is over 3 years of age, it may also make the child prone to being ‘made fun’ of, especially if they have their dummy in the nursery or school yard.

Aside from this, some health problems can also develop too. Health experts have said that it can delay speech development as the child will talk less when they have their dummy in their mouth. It may also affect the child’s teeth and the child may end up with their front teeth over lapping slightly, as warned by many dentists.

One thing I notice is that children often express their feelings less when they have a dummy in for long periods and this may mean they bottle things up or simply don’t learn how to express themselves clearly. For example,  have you noticed that a child may get excited whilst out walking when they see a dog, they go to shout doggy and as they feel the dummy slipping from their mouth they quickly suck it back in and so they end up not saying anything or expressing their excitement and emotions!

So here are my top 3 tips to help getting rid of that dummy easier.

1. Don’t give them the dummy or pacifier. Make them get it.

A lot of children are so used to just being handed a dummy that they just expect it and it can become a habit for the parent and child to have it at the slightest sign of upset or distress. So try putting the dummy in a different room and if your child drops it, leave it where they dropped it. You may just find that if they have to use the extra effort to go and get it themselves they may well just not bother, especially if they are being stimulated by other activities such as drawing and painting. They will learn gradually that they don’t need it and enjoy doing whatever is going on around them more than sucking on their dummy. Gradually move it further and further away until you can safely put it in the bin.

2. Simply explain they can’t have the dummy (pacifier).

If your child is old enough, from about 2 years old they will understand the word ‘no’ and simple sentences. Explain to them very clearly that they are not a baby anymore and they are becoming big girl or boy and that big girls and boys don’t need a dummy. Using this method may cause lots of tantrums and screaming to begin with but I’ve found that if persisted with, even for just 2 days, you can successfully get rid of the dummy as they learn quite quickly it is not coming back.

This is what I personally did with my own two boys; just went ‘cold turkey’ if you like.

What I did was to make sure that I filled their day with activities to distract them such as going to soft play, to the park/beach, some arts and crafts, cooking etc and when they were so engrossed in the activity they actually didn’t miss them dummy at all.

Then what I realised was it was me who was dependent on the dummy just as much as they were. I used it just to get a few minutes peace and quiet several times a day when in fact the boys wouldn’t have even asked for it.

Take time to notice if this may be you too, and of it is then, getting rid of the dummy may just be that little bit easier. Also, at night time I just soothed them by rubbing their back and gave them their favourite teddy and they soon just fell back to sleep.

You can even give your child the chance to get rid of the dummy themselves, picking them all up and putting them in the bin too. Ask them if they want to say goodbye, and although it may sound a little crazy saying goodbye to a dummy, it will provide some closure for your child as they will be losing something they’ve been depended on and comforted by

3. Give their dummy to the dummy fairy.

One way to get rid of the dummy is to tell your child about the dummy fairy.

This is particularly effective if your child has a good imagination and a lot of parents swear by this method. Simply tell your child about the dummy fairy as you would the Easter Bunny or the Tooth Fairy. Give them some warning, maybe tell them about it for a couple of weeks in advance saying,

“You know when you are nearly 2, there’s a dummy fairy that comes along and collects all the children dummies and takes them to dummy land because big girls/boys don’t need dummies anymore’.”

Keep saying something like this until you know your child understands that their dummy will eventually be taken too.

Then pick a day and prepare your child for this. Tell them that you have to collect all of their dummies together and leave them on a special plate for the fairy and that when the child gets up in the morning there will be a little present/treat for them in exchange for them leaving all their dummies.

Do this together and make sure to leave something your child will love in the morning. The child then often accepts that their dummies have gone but is happy as they have a fab gift instead to play with. It amazing how children often adapt to situations with ease when we do things the right way.

As always we’d love to hear what did and didn’t work for you when you tried to wean off a dummy. Does your child still have a dummy and nothing seems to help? Then please comment below and we’ll get back to you ASAP.

I cut my son's up right in front of him and told him no more binky and that was the last of it. I did prepare him for about 2 weeks in advance too.