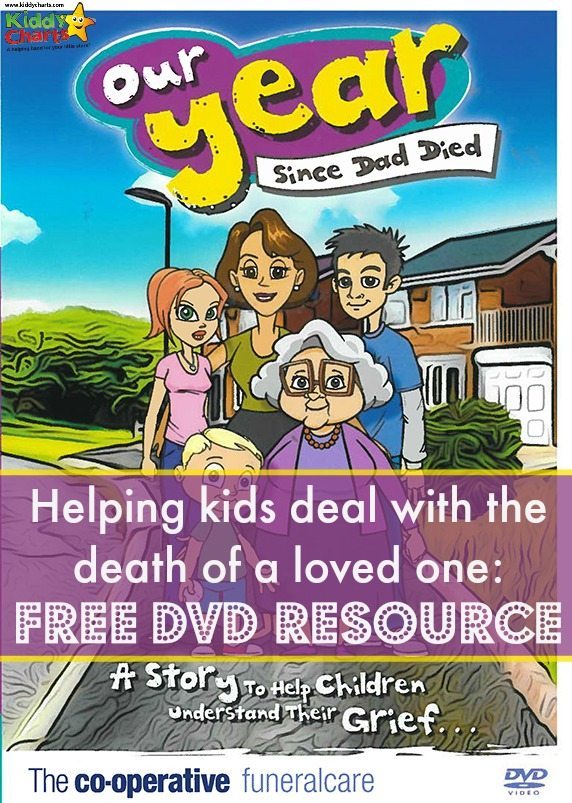 “In the UK a parent of a dependent child will die every 22 minutes, leaving 41,000 children without a parent each year.”

This is a deeply sad statistic for anyone to read, but it is the harsh reality of our lives that we lose those that we love, sometimes we are prepared, but all to often we are not. As adults, it is an incredibly difficult and confusing time, but imagine you are a child – how do you cope then?

I was offered the chance to review a series of resources that help children dealing with grief put together by Co-operative Funeralcare and CHUMS to give kids understanding around not only the emotions that they are experiencing at a death in the family, but also how others around them might feel.

What are the resources available for dealing with grief and supporting bereaved children?

CHUMS and Co-operative Funeralcare have released four short animated films on DvD, each focusing on the death of a close family member. The DvDs cover Dad, Mum, and Grandparents.

This provides a sneak peak of some of the content of the video about Gran:

Each of the videos on the DvDs look back on a year in the life of a child called Gemma, who has lost one of her family members, and taken a “video diary” of the past year and how both herself and her family have reacted and dealt with their grief.

The DvD also contains an introduction to the program with CHUMS, as well as other resources for school, and professionals including:

The first four of these resources are provided electronically when you put the  DvD into a PC or a MAC.

Did we think the DvDs do a good job of helping kids that are dealing with grief?

The companies decided to use animated video, as they believe it is a good way to communicate with kids; particularly the age range the films are aimed at. The target is kids between 7-16 years old. Having watched the films, the animation is simple, and engaging. Language used by the characters is at a the right level for the audience; easy to understand and also relevant. The characters within the DvDs are easy to identify with, despite being animated.

What is particularly good is that the DvD looks back on the year in a concise way, only 12 minutes, so that attention doesn’t waiver. Key topics are covered within the video too even though it is pretty short. Topics covered include all those that you would expect a child to need to understand:

This is not an easy topic to deal with, but the videos manage to do so delicately, without being patronising; extremely important with a resource aimed at children. The additional resources for professionals and teachers are also important in helping to structure classes and counselling sessions with children.

These videos are available from local Co-operative Funeralcare stockists FOR FREE to help parents and families through a very difficult period in their lives. Dealing with grief is tough. Helping our children to interpret and understand their feeling will make that process a little easier both for the child, and those left behind. My only criticism of the series is that for the older child, the animated films might feel a little too “babyish”, even though the characters do include older teenagers.

Overall though, this is a wonderful free resource for families. If you are in the UK, do reach out and get yourself a copy to see if it might help you with your children at such a difficult time.

Do you have any suggestions on helping children dealing with grief? If you do, please do let us know in the comments below. We would love to hear from you.