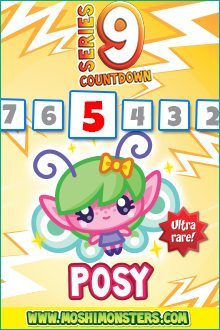 Yesterday within the series 9 countdown, was the turn of the cute star, Tessa, but today we have an even cuter little moshling on the blog; Posy the amazingly sweet, but very forgetful, little fairy. One of the rivals for the Pipsi crown of “cute.” She is a close second in the favourites in the KiddyCharts household.

Little Posy is the terribly forgetful, but amazingly cute little flutterbye fairy; an if you meet her you might wan to remind her which way home is!

Personally, I think they are the “mummies” of the world of Moshi as they can do some fantastically powerful stuff, freezing time, sprinkling fairy dust and other amazing spells. Howvever they are forever forgetting the simpler things in life like that the bath is running, or where on earth they put their keys

As she is a fairy, then she is never too far away from a daisy chain, or a cup of nectar.

Watch out for anything that can take them out though, like fly swats and the errant glockenspiels pinker *if that is what you call it*

Despite the bad luck some people believe 13 brings, Posy will hopefully bring you lots of luck, even if she forgets your name while she is doing it! If you want to hear about everything that happens on the blog, then do give us a bit of love by following the blog :-D