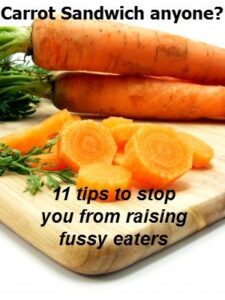 Time to get out the smug face. And yes, that title really is true. I just made tea for my kids, and they wanted sliced carrot in a bread roll. One with ham and one without. It’s all not just down to the “eating your greens” behavior charts, though that probably helped when they were younger. We have done a lot of groundwork to stop me from having fussy eating children. Here are my 11 top tips for getting the kids into veg from an early age:

The Yellow Days blog also has some great advice on fussy eating too, so pop on over there as well; some of her ideas and thoughts are similar to min, just said rather more eloquently, and with a lot prettier layout!

And if all else fails, get one of our personalised behavior charts :-)

How have you managed on the eating front? Would your two be happy with a carrot sandwich?

I used to butter sandwiches for my hubby and kids but one day i blend carrot in it and yes, they liked the taste change. I like the information shared above.

Some great tips! My youngest is a terribly fussy eater at the moment and I'm really hoping it's something he grows out of quickly. The funny thing is that you used to eat anything and everything when he was very little - argh!