My daughter will be seven in October so we still believe in the tooth fairy, which is why we have a tooth fairy progress and behaviour chart design. She wanted to have it; and she said it so sweetly I couldn’t say no…

A few weeks ago, she lost another tooth, to leave her with the lovely gap-toothed grin she now sports.

Unfortunately, we had a massive tooth fairy fail, which resulted in my daughter writing this rather cute tooth fairy letter…. 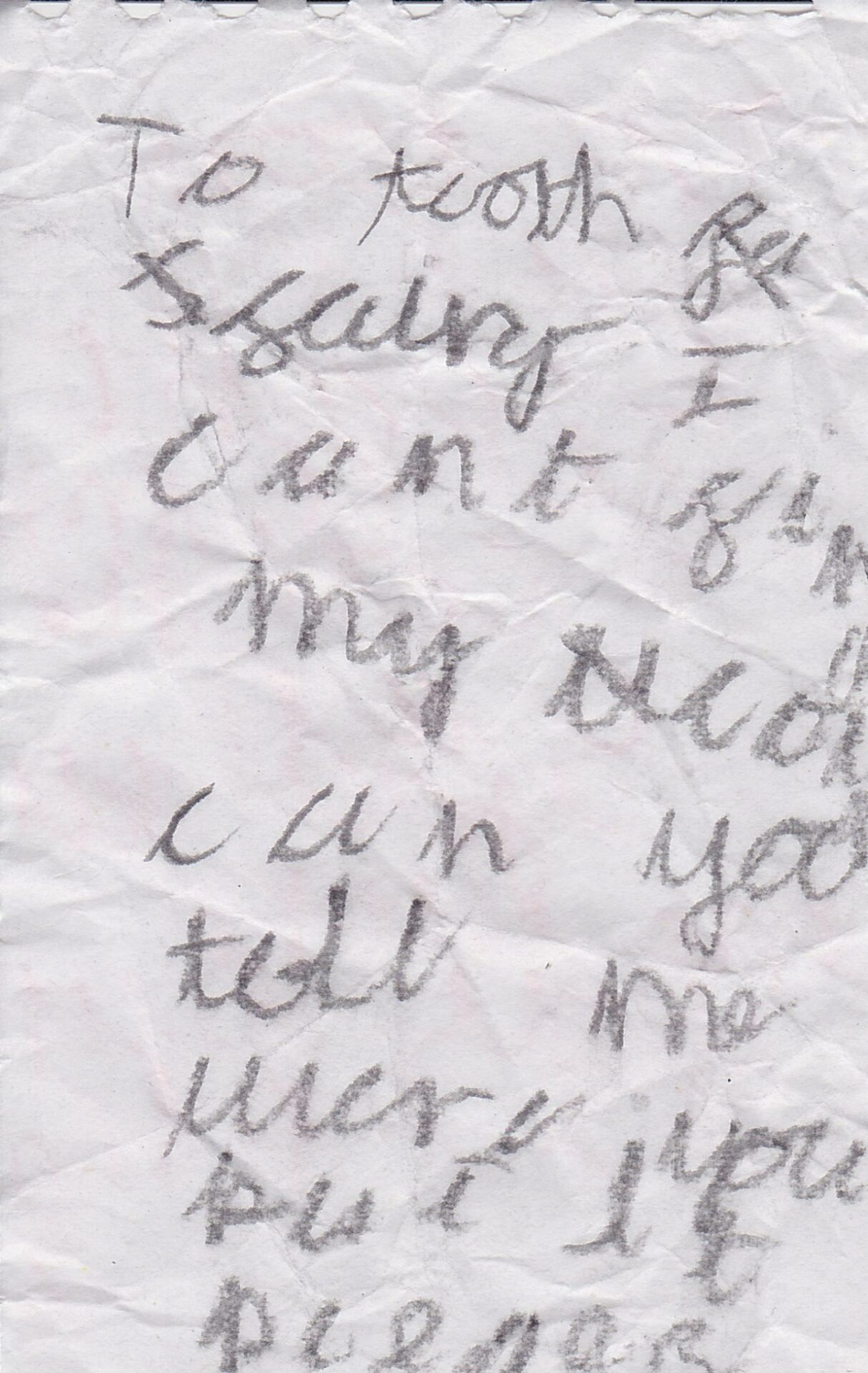 As she is still learning a bit on the handwriting-front, let me tell you what she wrote:

“To tooth fairy. I can’t find my coin. can you tell me where you put in, pleas?”

In her excitement, she had pulled the pillow off the bed so hard, she’d knocked the tooth off her bed. And as she has a high-sleeper, it had fallen down the back of a poster below in her desk area….

Not that we knew that. So we struggled, and struggled for ages looking before my daughter came up with writing the letter. Which was lucky really, because mummy had no idea how to get out of this one at all. I tried the old:

“Well, the tooth fairy must have forgotten”

“She didn’t, mummy. She’s taken the tooth, so she must have either run out of money at the other houses, or she put it somewhere else. I write letters to Santa, so lets write her a letter to ask her where she put it.”

Times are indeed hard. Even in tooth fairy land. Our fairy only gives 50p as it is, not sure Chatterbox was too pleased with the idea that the recession had hit so bad, she wasn’t going to get anything at all.

Obviously, we managed to find the coin in the end; I did have to distract my daughter with pink, shiny things while I sneaked off to look though….

My son had lost his 4th or 5th tooth one afternoon and we placed it on our kitchen counter for safe keeping. Well somehow, it must have gotten swept away and I couldn't find it. I was mad with worry and then I realised Ha! So I went to the box where I had his previously lost teeth, took one out that looked about the same and then scurried into the area and shouted Aha, I found it! He was never the wiser and all was well. Tonight I told him the story, he's 20 years old and probably old enough to know :)

Ha Ha! Hope he wasn't too devastated by the knowledge! ;-) Thanks v much for popping on over and commenting.

I forgot once it's quite a horrifying feeling :(( x

Yes, Zoe always wrote to the tooth fairy - "Pip" as we happened to have a book about a tooth fairy and that's what she was called. You got off extremely well with that one - perfect opportunity to go and get a coin!! The tooth fairy forgot once in our house and it wasn't pretty - almost forgot the following night, too, which would have been horrendous, but someone was obviously looking down on us, as No 3 woke up at 4am, we settled her back down, at which point we realised the tooth fairy was rather late with duties, so on went the computer to write a note back explaining how she'd been SO busy she'd got to us quite late and Phoebe had been awake, so she'd waited as long as she could in the hope she went back to sleep, but she'd got to the point where she couldn't risk being seen when daylight broke. Not any more of a 'lie' than the tooth fairy itself, just swapped the nights round ;-) DD1 seemed perfectly happy with that, as logic and reason have always been perfectly logical and reasonable to her, so it made perfect sense to her :-) Thank fully :-) She's now 10 and, as far as I'm aware, still believes in the Tooth Fairy and Father Christmas. I was wondering last year whether that would change, but it didn't. Am wondering again this year... Actually sure she'll be perfectly fine with it, maybe a little disappointed, but think with the subsequent progression to keeping it a secret from the other two and helping me with them, she'll just feel very grown up. Hopefully! ;-)