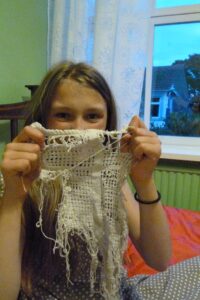 Security blanket: sleeping with a comfort object…this was what was left of my daughters…

This is a post from our guest blogger; Hollie Smith. So, who is she? Oh, well, I’m married, 42, have two daughters, Miss P the elder and Miss P the younger aged ten and eight, author of ten books including six titles for Netmums and four for White Ladder Press, the latest of which is First-time Mum: Surviving and Enjoying your baby’s first year

. She blogs here too, so check out her site when you get a moment.

This time last year, we undertook a major clear-out of my eldest daughter’s room. In the process of retrieving about four years worth of detritus from behind her radiator with a broom stick, I fished out a small, filthy, and very manky scrap of cellular blanket, its weave so comprehensively unravelled it was little more than a ball of loose threads. As I held it aloft on the end of the stick, Miss P and I gawped at each other in amazement for a moment before exclaiming in unison: ‘Bubbie’!

Yes, this was Bubbie – or what was left of it. My daughter’s faithful security blanket; her ‘transitional object’; the square of comfort she’d taken up with at three months old and come to rely on in a big way in the years that followed. Actually, technically speaking, it was the last of a series of Bubbies, which had numerous incarnations in their lifespan, since they were easily lost – and thankfully, easily replaced. I think she was probably about five when it went missing for the last time and – as she seemed to accept this well enough – that was finally that.

I mention this as an introduction to this post on comfort habits: something that many (if not most) babies adopt, and something that can sometimes cause anxiety for parents who fear it could become impossible to ditch in the future and problematic in the long term – perhaps picturing a childhood blighted by a Linus-like obsession with their blanket, or by buck teeth.

Yet transitional objects and comfort habits are normal and natural. They can be genuinely useful in helping a baby to self-settle (hence the phrase ‘transitional object’: they’re temporarily transferring their attachment from you, to it.) And in the case of something suckable, such as a dummy, or a blanket/thumb combo, it provides an alternative for them to chew on rather than a piece of you – a big relief if you’re breastfeeding and too sore to indulge pure recreational sucking, or if you’ve got into the habit (as we did, for a while) of offering one of your own (hopefully clean) digits.

Of course, as time goes on, reliance on said object becomes all about habit, and the comfort and security of familiarity. They’ll more than likely need it before they’ll countenance sleep, and to get them through all minor traumas. Some may even want to cling on to it fairly permanently – making it tricky to get it through the laundry when it’s so grubby it’s standing up on its own.

So when might a security blanket or a comfort habit become a problem?

If it’s just a little much-cuddled blanket or soft toy, your only real worry will be trying to get the stinking article in the washing machine sometimes, or if it’s unique, what you’re going to do about it when it gets lost. And eventually – years on – there’s the possibility that it will cause you a little embarrassment or difficulty if they’re still trailing it round at school-age and need to be dissuaded from taking it in to the classroom with them.

Dummies and thumbs are a little different, because dentists remind us that really serious sucking habits can misalign teeth, whilst speech therapists warn they could hinder speech and language development (which certainly makes sense: if a child’s always got a teat in his mouth, he won’t be able to talk, and practise talking, properly.)

Neither of these things need be a problem with sensible dummy use – in other words, if they only have their dummy when it’s truly needed, at sleep times or when the chips are down and comfort is required. Thumbs, of course, cannot be taken away but accepted wisdom is that you’ll only make it worse if you pester a thumb-sucker to stop. Better to chill out about it and, if it persists beyond school age, to perhaps employ some gentle, positive tactics that will encourage them to stop in their own time: a reward chart may well prove to be your friend here.

Bottom line is there’s no compelling reason not to give a baby a comforter of some sort if you think it could be helpful, or discourage them from developing a comfort habit of their own if that’s what they seem to be doing. And in most cases, there should be no need to feel alarmed about it even if the habit continues for a long time to come.

Truth is – as Miss P’s radiator tale proves – the vast majority of comfort habits and transitional objects will be left behind by the comfort seeker themselves at some point, without too much in the way of heartache or hassle, and with no undue consequences.

Incidentally, you may be interested to know that the recovered Bubbie was swiftly co-opted back into service by my nine-year-old daughter, despite being a total health hazard. A year on, it’s sitting on her pillow still.

A footnote: Safe sleep campaigners now recommend offering a dummy to babies under six months, once breastfeeding is established, because there’s some evidence it may contribute to a reduced risk of cot death. Key to this piece of advice is offering the dummy every night (although there’s no need to subsequently get up in order to replace it if it drops out.)

For parents who don’t want to give their baby a dummy, or can’t interest them in one, there’s almost certainly no need to worry about this piece of advice if you’re confident you’re following the other safe sleep guidelines.

Does your little one have a security blanket or a comfort habit? If so, what is it? And if they have given up, was it easy? Do share with us below.

I am 29 years old and I still have my blankie. I have a husband of 7 years and three children. And I still have the habit. It has been replaced several times but is never the same until its dirty and has that smell. It has to be the same thou the old hospital blankets that have that certain fill when you rub your fingers on it. I like it better when it's cold and it hardly ever gets washed it takes forever for it to get the rite smell back. My husband makes fun of me he does not understand. I really don't understand myself but I can't do without it i suck my fingers and smell of my blankie while I run it threw my fingers. It calms me and makes me feel better. If I am upset or stressed it helps me cope. I can't explain it but would love information as why. I don't think I will ever do away with mine its part of me and always has been as long as I can remember. My mom used to try everything to make me stop paint hot stuff on my fingernails etc. Until the dentist told her that sucking the fingers would not mess my teeth up like sucking the thumb. Hope this helps someone to know that their habits are the same as some and its ok never be ashamed.

Hey everyone I’m 23 years old. Today I decided to goggle just out of curiosity why I’ve always need to have a security blanket with me specially at night. I’ve came to conclusion that having something that makes you feel good shouldn’t make you feel embarrassed or ashamed. Growing up my family and friends never really cared they all knew about my (mamas que mamas) aka my security blanket. The only one that was really against it was my grandma she tired so many times to get rid of it but it never worked.

Like about 4 years ago I lost my blanket in the airport I was so devastated. My dad even tired buying me a blanket that look pretty much the same as my old one but it was never really the same. That’s when I decided that maybe that was a sign to let go and it was time for me to “grow up”. I really did try but I would catch my self wanting to grab other blankets or even shirt to see if they felt the same way. But never really found anything.

Then a year later I met my boyfriend. The first night I spend the night at his house he had this blanket he was sleeping with. As soon as I touched it I knew that, that was “the one”. I’ve been with him for about 3 years now and his very understanding. He never really judged me he’s all for it as long as I’m happy his happy and that’s how it should be.

I know it’s hard for people to understand why we need it or want it. Cause I even have trouble understanding, I honestly can’t explain it. I just know it makes me feel happy. If you are a mom having trouble taking it way from your kid I think the best thing to do is to let them be happy and just support your kid love them don’t judge them. If one day they decide on their own then that’s their choice. So yeaaahhh!

I am 14 and the still sleep with a lovie and still suck my thumb .My mom doesn’t care but my uncle who is a teacher cares and I bring my lovie to school and my uncle always take it from me

I'm just going to share that I am a 41 year old that has a 41 year old tattered blanky. I'm not ashamed of it anymore. There is purpose. I never could understand the science behind it, I just knew that smelling it provided some sort of euphoria, but typically only when it was cool. All I know is that it calmed me down and made me feel good. Yes, like a drug; sort of. What I didn't know is that I was helping myself. After running DNA tests, I found that I had issues processing Dopamine and Norepinephrine, MTHFR, and a few other mutations (most are very common). I knew I was always a nervous child, but I found myself sniffing my blanket, and the rush of calmness it gave me and regenerated some of what my body can't do on its own, or is this a way of our bodies trying to regenerate. I can't express enough how much my body cannot handle stress. If my parents had taken this from me, I'm sure I would have been ok, but stress is the number 1 cause of cancer. Why start children early on that path?

Please consider letting your child tell you when they don't need the item. You may not understand because you don't have the same DNA (we are all different) Albeit, 80% has some form of a polymorphism or mutation that I have, it just depends on several other factors.

I know I'm a little bit late to respond but I just thought it was awesome how I am also 17 and still sleep with the comfort blanket that used to be my mom's.