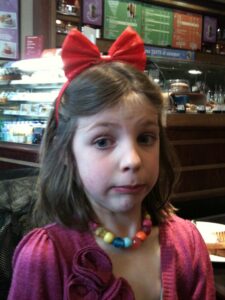 My daughter is six, going on forty. I do believe I have mentioned this before.

She worries about an awful lot of stuff that I really don’t think it is necessary for a six year old to even be thinking about, never mind worrying about.

I really, really do wish I could get inside her head sometimes, though if its as cluttered as mine is at the moment, I am pretty sure I would get lost. But then, I get lost going to the shops on ocassion; or perhaps that’s distracted, now where was I….

Yes, my daughter and her worries.

Last week I was tucking her up in bed. And she started to cry. So naturally, I asked her what was wrong.

“Mummy, you’ll have to take the Hello Kitty stickers off my wardrobe, won’t you when I leave home. Please don’t take them off. I don’t want to break up your lovely picture.”

Erm, excuse me – where the hell did THAT come from. You were at least looking at them I suppose, but that tangent is going off on one in a way that I’d be proud of…

So I explained that she might not have them on there still, she may have different tastes when she is bigger. She may like Justin Bieber or something, God help us.

She then got more upset (oops #parentingfail) and said:

When am I going to leave home mummy? How old will I be? Where will I actually go? Where will my kids go”

Woah, girl. Back up a bit. Who are you having these kids with? Do we approve of him? Does he have tattoos and ride a motorbike? And actually., who are these kids anyway?

Oh and by the way, in case you forgot, you are only six.

After calming down, and wondering whether it was something I said, I decided the best course of action was a hug, followed by assurances that she could leave when she wanted to, and we weren’t going to throw her out. Though that depends on whether she is still here when she really is forty. Rather than being a forty-year old trapped inside the body of a six year old….

Where will my kids sleep. mummy?

She seemed a bit happier with that, but then her brow furrowed again:

But if I decide to stay mummy, where will the kids sleep? My bed is too small for them.”

It is too small for them -sorry, do her kids actually exist now – how did we get here again…?- It’s also too small for me. At least, that has always been my excuse when she asks me to stay with her at night. She’s a good sleeper, though so I shouldn’t be complaining. She doesn’t need one of our charts for sleep issues just for other stuff! And I am sure that’s for another post in time.

That aside, I actually didn’t have a clue what to say, so quite frankly,I gave up and told her she was six and didn’t need to worry about that now. *totalmummycopout*

Perhaps I should have told her if she has kids, we can chuck her brother out and they can sleep in his room nextdoor. Actually, maybe best not to, that’d be leading on to a whole new world of worry….

Perhaps Little Miss Chatterbox was the wrong thing to call her. Maybe it should have been Little Miss Worry. Can’t think where she gets it from.

Anyway, must go now and check on the kids. It’s awfully quiet up there…..

What do your children worry about that knocks you for six? If only we could work out what they are thinking, Eh?

As an aside thought you might like to see the pictures where we tried to get that worried face, and then gave up – not sure the drama classes are working!

Attempt Two – trying not to laugh…!

Bless they do come out with some of the funniest things don't they... biggest Littlesheep (8) is going to London at the weekend with Grandma and then was working out at the next Queen's jubilee he would be old enough to get the train to Grandma's on his own! Then we got on to all sorts of complicated stuff of him taking Grandma to London when she was 100 and something years old!