The BFG, The Lion King and Up! have been named as three of the films all children should watch before the age of 11, according to a new list compiled by leading film industry experts.

The guide to the 50 films every child should see before they grow up has been created by film education charity Into Film, in partnership with the UK video industry to launch the Must See Movies Before You Grow Up campaign, which will see all 50 films distributed by retailers this summer – www.intofilm.org/msm 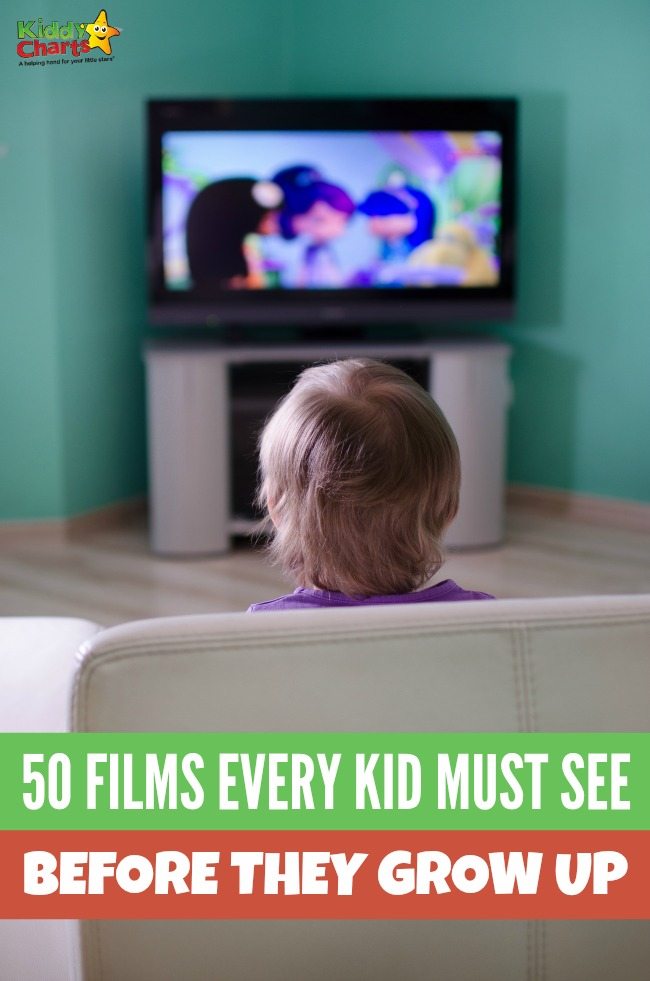 Each film was measured against a series of metrics, from the impact of the movie on a child’s intellectual, educational and emotional development, through to suitability for family viewing plus overall entertainment and nostalgia factor.

The judging panel, led by Into Film’s education and programming teams who specialize in curating film content and developing teaching resources for schools across the UK, narrowed down the selection of films to a shortlist of 250 from a catalogue of over 3,000 family movies.

The shortlist then lead to the final 50 films in the selection, which feature a range of past and current films that have been deemed to benefit child development and creativity.

TOP 50 FILMS EVERY CHILD SHOULD SEE BEFORE THEY GROW UP (in alphabetical order) as:

1. 101 Dalmatians: Minions of Cruella de Vil abduct a litter of Dalmatian puppies. Before she uses them for a atrocious fashion statement the parents must find them.

2. A Little Princess: When her father goes missing and is even presumed dead. A young girl is relegated to servitude at a boarding school.

3. Annie: Follow a young orphan girl’s adventures in finding a family that will take her.

4. Babe: The Gallant Pig : Babe is a one of a kind pig, raised by sheephearding dogs he is set to become the best sheepherder there is.

5. Beauty and the Beast: A tale as old as time! A beautiful girl named Belle becomes a prisoner of the Beast in his castle. A wonderful story about seeing past the ugly to find true love.

6. Cloudy with a Chance of Meatballs: A local scientist most known for his failures, builds a machine that is capable of turning raindrops into food.

7. Coraline: Coraline discovers an alternate world, that resembles the real one but is in many ways a whole lot better.

8. Diary of a Wimpy Kid: What was supposed to be a visit to Meemaw’s 90’th birthday party goes hilariously off course as Greg schemes to go to the video gaming convention.

9. Dumbo: Dumbo was ridiculed because of his big ears but with the help of his friends he is set to achieve his full potential.

10. E.T. The Extra Terrestrial: A troubled child finds the courage to assist a friendly extra terrestrial escape and find his home world.

11. Fantastic Mr Fox: An urban fox can not resist his old nature and return to raiding farms for food.

12. Free Willy: A touching story about a boy and a whale. When the boy finds out the killer whale is set to be killed by the aquarium owners, the boy risks everything to set the whale free.

13. Frozen: A wonderful story about two sisters. The newly crowned Elsa accidentally cursed her home into infinite winter, her sister Anna embarks onto an adventure to change the weather condition.

14. Home: An alien, who is on the run from his own people, becomes friends with a girl from Earth.

15. Hook: Captain Hook kidnaps Peter Pan’s children so Pan is forced to go back to Neverland and reclaim his youthful spirit.

16. Hotel Transylvania: What happens when a boy accidentally wanders into the home of count Dracula and falls in love with Dracula’s teen aged daughter?

17. How To Train Your Dragon: A clumsy young viking who is set to become a dragon hunter finds himself in an unlikely friendship with one of them.

18. Jumanji: Two kids find an play a magical board game that brings about all kinds of wonders and disasters.

19. Kubo and the Two Strings: A young boy named Kubo must locate a magical suit of armour worn by his late father in order to defeat a vengeful spirit from the past.

20. Mary Poppins: A movie about the most magical and fun nanny of all times.

21. Matilda: Matilda is a wonderful little girl, a genius who also have some pretty cool powers too.

22. Nanny McPhee: A nanny that has something wonderfully odd to her appearance. The nicer you behave the more fun things become.

23. Night at the Museum: What happens in the museum after the closing hours? A newly recruited night security guard discovers that an ancient curse causes the animals and exhibits on display to come to life and wreak havoc.

24. Oliver! Young Oliver Twist runs away from an orphanage where things are really bad and meets a group of boys trained to be pickpockets by an elderly mentor.

25. Paddington: A young little Peruvian bear travels to London in search of a home. Finding himself lost and alone at Paddington Station, he meets the kindly Brown family, who offer him a temporary haven.

27. Shaun The Sheep Movie: Shaun the sheep and his scheming friends devise a plan to put their master to sleep so that they won’t have to work.

28. Shrek: Once upon a time, in a swamp far far away, there lived an ogre called Shrek who just wanted to be left alone.

29. Space Jam: An evil alien needs a new attraction in his amusement park so he and his gang head off to earth to kidnap Bugs Bunny and his friends. Bugs challenges them to a basketball game to determine their fate.

30. Spirited Away: During her family’s move, a 10-year-old girl wanders into a world ruled by gods, witches, and spirits, and where humans are changed into beasts. 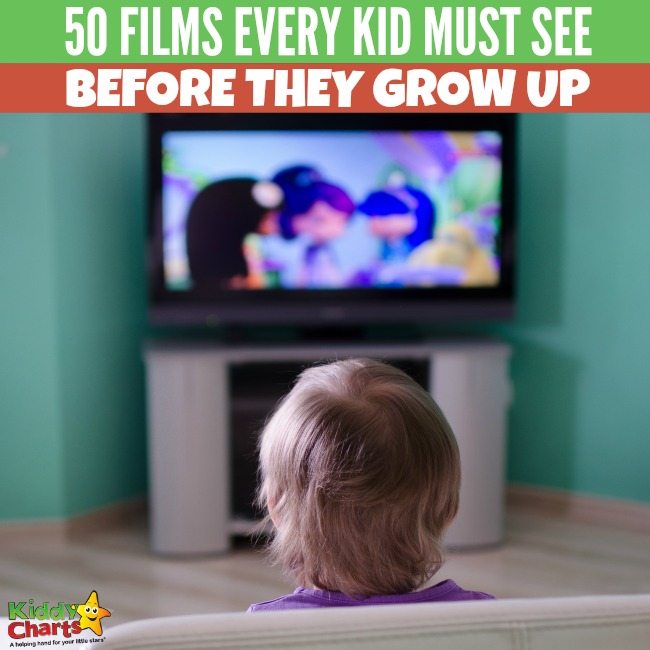 31. Star Wars: A New Hope: Luke Skywalker joins forces with a Jedi Knight Obi-Wan Kenobi, Han Solo, a wookiee and two droids to save the galaxy from the Empire’s world-destroying battle-station.

32. Swallows and Amazons: The Swallows are on holiday in the Lake District and they sail on their own to an island where they start a war with rival children (the Amazons). In the meantime, a mysterious man on a houseboat accuses them of a crime they did not commit.

33. The Adventures of TinTin: Reporter Tintin and Captain Haddock set off on a treasure hunt for a sunken ship commanded by Haddock’s ancestor.

34. The BFG: An orphan girl befriends a giant who takes her to Giant Country, where they attempt to stop the man-eating giants that are invading the human world.

35. The Gruffalo: A cunning mouse goes for a long walk in the forest and outwits a succession of predators.

36. The Iron Giant: A robot comes from outer space and a young boy befriends it. On the other side a paranoid government agent is set to destroy the robot.

37. The Jungle Book: A thread from the tiger Shere Khan forces Mowgly to flee the jungle and embark on a journey of self discovery with the help of panther, Bagheera, and free spirited bear, Ballo.

38. The LEGO Movie: Follow a story of an ordinary Lego construction worker, thought to be the prophesied ‘Special’, as he is recruited on a special mission.

39. The Lion King: Follow the story of a young lion cub Simba, a heir to the throne.

40. The Lorax: A twelve year old boy searches for the one thing that will help him to win the affection of the girl of his dreams. To find it he must discover the story of the Lorax, the grumpy yet super charming creature who fights to protect his world.

41. The Never-Ending Story: Bullies like to tease Bastian and in order to avoid them he ducks into a bookstore. There he finds a book like no other.

42. The Princess Bride: The most famous fairy tale about a beautiful young woman and her true love.

43. The Secret Garden: A young British girl who was born and raised in India lost her parents in an earthquake. She is returned to England to live at her uncle’s estate.

44. The Witches: A young boy accidentally stumbles into a witches convention. He must stop them no matter what, even though he was turned into a mouse.

45. Toy Story: A cowboy doll Woody is profoundly threatened and jealous when a new cool spaceman figure supplants him as top toy in a boy’s room.

46. Trolls: After the Bergens invade Troll Village, Poppy who is the happiest Troll ever born, and the curmudgeonly Branch set off on a journey to rescue her friends.

47. Up! 78 year old Carl travels to Paradise Falls in his home equipped with balloons, inadvertently taking a young stowaway.

48. Wallace and Gromit: The Curse of the Were-Rabbit: Wallace and his dog, Gromit, set out to discover the mystery behind the garden sabotage that plagues their village and threatens the annual giant vegetable growing contest.

49. Willy Wonka and The Chocolate Factory: When Charlie receives a golden ticket to a chocolate factory, his sweet tooth wants going into the lushing candy, it turns out there’s an adventure in everything.

50. Zootropolis: In a city of anthropomorphic animals, a rookie bunny cop (and bunnies are usually not cops) and a cynical con artist fox must work together to uncover a conspiracy. 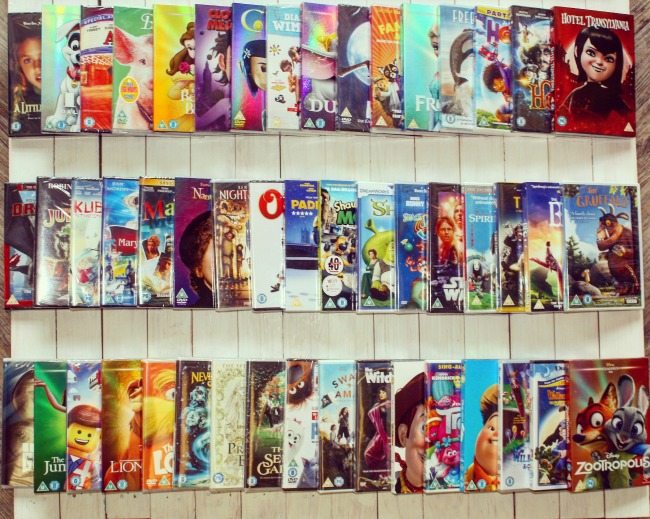 Sign up for our newsletter too, so that you don’t miss out on the other great activity for kids ideas and freebies that we have for you.